On May 11, on the Sunday of the Paralytic, Rector of St. George Church, Archpriest Igor Tarasov served the Divine Liturgy in our temple. After the Gospel lesson he preached a homily:

“On this Sunday the Scripture readings tell us about some examples of miraculous healings. In the Gospel lesson, Jesus healed the paralytic at the Pool near the Sheep Gate in Jerusalem (Jn. 5, 1-15). And in the Epistle lesson, the same power of Christ to perform healings is seen in holy Apostle Peter. St. Peter healed the paralytic named Aeneas and raised the woman named Tabitha from the dead. It is interesting that in each one of these three miracles the word “rise”, or “arise” is used. Jesus says to the paralytic, “Rise, take up your bed and walk” (Jn. 5, 8). St. Peter says, “Aeneas, Jesus the Christ heals you. Arise and make up your bed” (Acts 9, 34). He also says, “Tabitha, arise” (Acts 5, 40). The word “rise” is the key word in today’s Scripture readings. Therefore, today we are going to reflect upon this single but important word.”
“We may say that the whole message of the Holy Gospel is contained in that little word “rise”. Jesus was risen from the dead, so we have to rise. He raised us from the depths of sin and death to a new life of peace and power. When Peter began to sink into the sea because of his little faith, Jesus reaches out to raise him, as He raised us in the waters of Baptism lifting us from sin and death to a new life.”
“One of the images of the Resurrection shows the Lord as He victoriously rises from the tomb. It is a very popular image. It depicts Jesus alone or along with the Angels. This picture is known both in the Eastern and Western Church. Another icon, known only in the Orthodox Church, is in reality the icon of Christ’s Descent into Hell. The glorified Christ descends into the abyss. Even while the body of Jesus was in the tomb those three days, His love was active. He used that time to descend with His soul into the very depths of hell, into the abyss of death, to break the bonds of death and to proclaim there the good news of salvation. He, the Second Adam, the perfect Man reaches out to touch, renew and raise the First Adam, the man who had fallen from life, who dwelt in the land of the shadow.”
“That icon of the Resurrection shows Christ not standing alone, but raising, lifting Adam and Eve out of the depths through the broken doors of hell. He frees them, but at the same time He frees us. The hand that reaches out to grasp the hand of Adam reaches out to embrace the descendants of Adam as well. We are also bound by death, held captive by the power of sin. We too, have died and been cast out into the abyss. Yet the Risen Christ comes to us as to lost sheep, descending in His love to seek us out in the darkness and to raise us up with Himself. If we make our bed in hell, He is there, ever present, ever reaching out to raise us with Him into the glory of the resurrected life. From anxiety in the face of death, He raises us to an unshakeable hope in the resurrected life. From fear of the future, He raises us to undiminished joy. From loneliness and separation, He raises us to friendship with God. Because He is risen, He has the power to help us rise from the tombs of slavery, sin and death to fullness of life.”
“Some people say that religion is moonshine. They mean that it does not give enough light and heat, does not really help. But they forget that the power of the moon lifts trillions of tons of water each day to make the tides rise in the oceans of the world. In the moon there is a great power. Greater than the moon’s power is the power of Him Who created the moon. It is the power to help us rise from the deepest abysses in life.”
“Dear brothers and sisters! We all have troubles in life. We are all sinful. What we need more than anything else is power to rise above them. But we cannot rise above all troubles, and difficulties; we cannot rise from the depths of sin unless we have within us Him Who helps us rise, the Risen Lord Jesus Christ. It is by His power Aeneas was raised; Tabitha was raised; the paralytic by the pool at Sheep Gate was raised. This same Jesus gives us the power today to rise above whatever obstacles life can place in our way.”

Following the Liturgy dismissal Fr. Igor congratulated the ladies in the parish on the occasion of Mother’s Day which was celebrated in the United States on this Sunday. Traditional polychronion was sung. 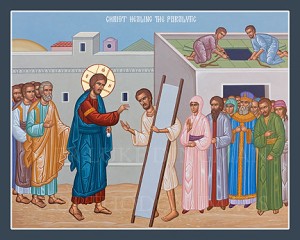