On July 13, on the 5th Sunday after Pentecost St. George Parish had a nice Sunday celebration in its temple. On that day the Church also commemorated 12 Holy Apostles. Our Rector, Archpriest Igor Tarasov served the Divine Liturgy. Following the Scripture readings he preached a homily:

“Today’s reading from the Epistle of St. Paul to the Romans discusses the differences between the Old Testament, Jewish understanding of righteousness and the New Testament, Christian way of salvation. Among different words of St. Paul, we should pay attention to the final statement of today’s reading: “If you confess with your mouth the Lord Jesus and believe in your heart that God has raised Him from the dead, you will be saved. For with the heart one believes unto righteousness, and with the mouth confession is made unto salvation” (Rom. 10, 9-10). We have to believe in our Lord Jesus Christ in our hearts, and that faith has not to be hidden, but expressed by our words.”
“What is in the heart has to be on the lips. It is not otherwise with Jesus. This is the message of the final statement of today’s Epistle lesson. Our Lord Jesus Christ put it this way: “Whoever confesses Me before men, him I will also confess before My Father who is in heaven. But whoever denies Me before men, him I will also deny before My Father who is in heaven” (Mt. 10, 32-33). In our days many people like to say that they prefer to keep their faith in their souls. “You should believe inside of your soul, not on the outside,” they say. This is an excuse for many people in Russia not to attend the church, not to participate in the liturgical life, not to be the churched people. Today’s Epistle lesson, as well as the words of our Lord Himself put these people to shame. You cannot keep faith in your heart. You must also confess it with your lips. You cannot deny Christ before men.”
“To confess Christ before men was originally the mission of the Apostles. Today the Church commemorates Twelve Holy Apostles who were called by our Lord Jesus Christ to follow Him. After His Ascension into heaven they had to spread the Holy Gospel, to preach the Good News of Christ and to testify before all men about Him. The twelve Apostles were considered “witnesses of the Resurrection” of Christ. They were present in Jerusalem when the Lord was risen from the dead. He appeared to them many times before He ascended into heaven. Today in the second Gospel reading we heard the names of the 12 Apostles. We heard that the last of them was Judas Iscariot who betrayed Christ. Thus Judas was expelled from the gathering of the Apostles. But later the Apostles elected a person to take Judas’ place. And doing that the Disciples said that they needed another witness of Christ Resurrection (Acts 1, 22). They elected Apostle Matthias to become one of the Twelve who took the place of Judas (Acts 1, 23-24).”
“Apostles professed the Resurrection of Christ to the world. Even in today’s reading St. Paul mentions confession that God has raised Jesus from the dead (2 Cor. 10, 9). This mouth confession could end with martyrdom. And almost all holy Apostles were martyred for their faith and its confession before men. Later the same faith of the heart was confessed by the lips by the holy Martyrs. Again, it cost their lives to confess with the mouth the Christ who was in their heart. Today we confess Jesus before men publicly every time when we recite the Nicene Creed during the Liturgy: “I believe in… one Lord Jesus Christ…” But are we confessing Him in our lives, at our home, at our place of work? If it were a crime to be a Christian, would there be enough evidence to convict us?”
“A group of thieves accosted a Catholic nun who was wearing ordinary street clothes, as many of them do at modern times. They forced her into a car. She kept protesting and saying, “I’m a nun.” They did not believe her. She insisted to call her convent, to talk to her mother superior. They did, and found out that she was indeed telling the truth. Before they let her go, however, they stripped her back and carved a cross on it with a knife. “Next time, wear something so that people will know who you are,” they said to her.”
“Do people know who we are? Does my appearance, my life confess Christ before men? Do other people know what I stand for? Do I ever confess to them with my mouth the faith I have in my heart? Am I ashamed of my Savior? Do I hide my faith in Him, like a chameleon, blend in with the colors of the sinful world around me? If so, then I need to recall the words of my Savior: “For whoever is ashamed of Me and My words in this adulterous and sinful generation, of him the Son of Man also will be ashamed when He comes in the glory of His Father with the holy angels” (Mk. 8, 38).”
“Dear brothers and sisters! There cannot be a true Christian faith which is kept inside of our heart and is not confessed with our mouth. There is no true faith “inside the soul”. Let us confess with our mouth the Lord Jesus and believe in our heart that God has raised Him from the dead, as St. Paul teaches us. Let us follow the example of the champions of our faith, holy Apostles who being witnesses of Christ’s  Resurrection confessed that before the whole world, so “their sound has gone out to all the earth, and their words to the ends of the world” (Rom. 10, 18) as the Church sings in their honor. Let us imitate the holy Martyrs who did not wish to spare their lives but confessed Christ before men. May our way of life show that we are really Christian people.”

During the Liturgy the Rector prayed for the repose of the soul of the newly-departed Metropolitan Vladimir of Kiev, the 9th day of whose repose was marked on that very Sunday. 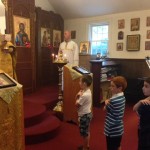 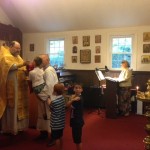 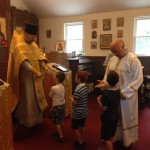