On Saturday, August 2, the feast of the Holy Prophet Elias, His Eminence Justinian, Archbishop of Elista and Kalmykia celebrated his farewell Divine Liturgy with clergy of the Patriarchal Parishes in the USA at St. Nicholas Cathedral in New York  His Eminence was co-served by His Grace, Bishop Jerome (Shaw, Retired-ROCOR) and a multitude of clergy from our Patriarchal Parishes, including St. George Church’s Rector, Archpriest Igor Tarasov. Some clergy from the Russian Church Outside of Russia served as well.

At the end of the Liturgy, Archbishop Justinian greeted the gathered clergy and expressed his gratitude to all those who traveled near and far to wish him many years in his new Eparchy. His Eminence explained the decision of the Holy Synod to transfer him and assured everyone of his Archpastoral Prayers and lovely memory. On behalf of all the clergy of the Patriarchal Parishes, Archpriest Emil Minkovich expressed gratitude to Archbishop Justinian for his love, support and prayers to each clergyman and layperson in his four-year tenure as Administrator.

Interaction between the Archbishop and the clergy continued in the Hall of St. Nicholas Cathedral. At the farewell luncheon, our Rector, Fr. Igor toasted in honor of His Eminence and expressed gratitude on behalf of the clergy and parishioners for the loving and dedicated Archpastoral care of Archbishop Justinian during his four-year service as our spiritual leader. 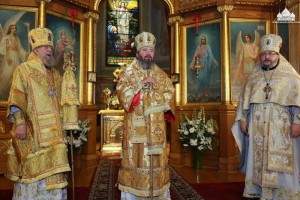