On September 7, on the 13th Sunday after Pentecost, Archpriest Igor Tarasov, Rector of St. George Church, performed liturgical celebration in our temple. Following the reading of the Hours the Rector served the Divine Liturgy.
After the Gospel lesson Fr. Igor preached the following homily:

“Today’s Gospel reading tells us a parable about evil tenants of the vineyard. This parable was told by our Lord Jesus Christ a few days before His suffering and death, in the beginning of the time we call the Holy Week. The story was addressed to the leaders of the Jewish people, to those who did not accept Jesus as their Messiah and who wished to destroy Him. We may have different ideas flowing from this parable, but let us simply see what our Lord wanted to say to His opponents.”
“The landowner in the parable is God the Father. He planted a vineyard which is Israel, the holy nation of God, the Church of the Old Testament. The tenant vinedressers are the leaders entrusted with the care of God’s people. According to the parable they did not wish to give the owner His share of grapes. God sent His servants to them. Those landowner’s servants are the Prophets, sent by God in the times of the Old Testament to proclaim His word. The tenants beat and killed the servants. The Jewish leaders persecuted the Prophets and really killed some of them. Since those God’s servants were mistreated and not listened, God sent His Only-begotten Son. The leaders might honor the Son of God, our Lord Jesus Christ. But in their envy and impiety they murdered the Son as well. Our Lord Jesus Christ was cast out of the holy city of Jerusalem and crucified, just as the landowner’s son in the parable was cast out of the vineyard and killed.”
“At the end of His story Jesus is asking the listeners: “When the owner of the vineyard comes, what will he do to those vinedressers?”(Mt. 21, 40). The answer was that he will punish those wicked people and lend the vineyard to other vinedressers who will render him the fruits in their seasons. Leaders of the Jews were punished. Very soon Jerusalem was taken by the Romans and the Temple destroyed. The Jews had to scatter everywhere in the world. But it is not so important how God punished them; it is His right and privilege. What is important for us is to be the new and worthy tenants of God’s vineyard.”
“Now the Church of the New Testament is God’s vineyard. The new tenants are the people rendering the fruits in their seasons, the new people of God. We are called to be those people. After the parable Jesus said to the Jews: “Therefore I say to you, the Kingdom of God will be taken from you and given to the nation bearing the fruits of it.” (Mt. 21, 43).  That sentence is not included in today’s reading, but it follows in the Gospel right after. The Kingdom of God is now given to us. But we must bear the fruits of the Kingdom and to render the fruits in their seasons.”
“What fruits we are talking about? There are lots of them. As laborers in the vineyard of the Lord we are called to honor God, to serve Him, to love our neighbors, to worship God in a right way, to keep the Commandments, to be obedient to the Church. All our deeds and choices are the fruits we render to the true Owner and Master of the world. What kind of fruits do we render?”
“Dear brothers and sisters! Let us bring forth good and best fruits of our piety, love and virtue. And let us beware of the attitude of the evil tenants which is now overspread in the world. Many people now forgot about God, His Commandments and about true worship of Him. They ignore the servants of God whom He sends to remind them of their duties. They would be capable of murdering His Son again if He came to tell them the truth. Therefore, dear brothers and sisters, let us spend our life watchfully to be good tenants in the Lord’s vineyard.” 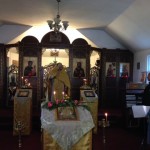 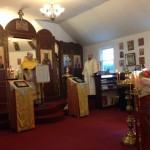 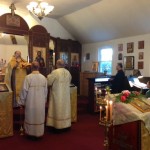 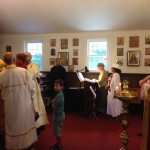 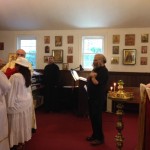 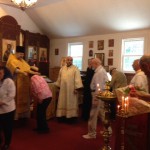