On September 13, 2015 the Church celebrated the 15th Sunday after Pentecost, as well as feast of the Placing of the Precious Cincture of the Most Holy Mother of God. Rector of St. George Church, Archpriest Igor Tarasov served the Divine Liturgy in our parish temple. Following the Gospel lesson he preached a homily:

“Today’s Gospel tells us about the main principle of our faith: “Love God and love your neighbor as yourself”. Unfortunately, sometimes we forget what these words really mean. They mean that, first of all, we must believe in a God who is the Creator of all things. We do not believe in a god who is just some idea, on whom we can hold responsible or whom we can blame. For example, it is very common today to hear the words: “We all believe in the same God”. These words are not true. There are some people for whom god is a bottle of vodka, for others their god is a pop star or a soccer team. We do not have the same god.”
”Secondly, we have to believe in a God who is Love. For example, in other religions there is no god who is Love. Buddhists do not have any god: Buddhism is rather a philosophy, not a religion. Hindus believe in many gods, who try and do the strangest things. Muslims believe in a god who encourages warfare and acts of terror. Even the Jews whom we consider having the same religious roots as we do, believe in a quite different god, a god who takes revenge, “an eye for an eye and a tooth for a tooth”. Only the Christian God is the Maker of all and also the God of Love.”
“All the teachings of the Church are based on love. The Christian God is a God in three Persons who love each other, a perfect unity in diversity. The Christian God is He who sent His Son to us. In an act of self-sacrificial love He gave up His life out of compassion for mankind. And when the Son had of His own will thus saved mankind from sin by being crucified and risen, overcoming death by death, the same Son sent the Comforter from His Father to us, the Comforter, who is the Holy Spirit, the presence of God, the Spirit of truth and love.”
“The second commandment given by Christ is to love our neighbors as ourselves. Christ says that this commandment is like the first one. For if we are called to love the Creator, and then we must also love His creation, including our fellow-men, who are made in the image and the likeness of God the Creator. In this commandment we are also called to love ourselves, not in the sense of selfishness and vain self-admiration, but as a gift of God. And we should remember that we ought to love our neighbor just as we love ourselves. Thus, we cannot love ourselves less than other people! But again, other people deserve the same love as we should have towards ourselves.”
“Here we have to be careful again because by this word “love” are called many things which are not really love. Especially, by “love” are called acts of lust and fornication. Two days ago we commemorated the Beheading of St. John the Baptist. The Holy Forerunner of the Lord was beheaded because he chastised the sinful life of King Herod. That king married unlawfully the wife of his brother. Thus the king’s marriage was not a marriage but adultery. St. John openly condemned that and, as a result, the king’s unlawful wife, Herodias, plotted against him and succeeded in that, so the king ordered St. John to be executed. The Gospel tells us that story in detail. Herodias probably considered her actions to be based on love. But in fact, her behavior was not love, but sin. It was not from God but from the evil. And a lot of other people in every century repeat the same sin of Herodias when they break the marriage bonds in order to follow their “love” call which, in fact, is a call of lustful desire. This is why, let us not confuse love of the neighbor with sinful and lustful desires of the flesh.”
“In the Scriptures the holy Apostle Paul writes that at the end of the world the love for others will grow cold. It seems that this has not yet happened. For as long as there are a few people who continue to keep the Commandments, to love God and love their neighbor as themselves, the world will continue.”
“Dear brothers and sisters! What should we do? In the words of the Psalms, it is all very clear: “Seek God and your soul shall live” (Ps. 68, 32).“

Following the Divine Liturgy the Rector congratulated our long-time parishioner Natalia (Dolores) Soho on the occasion of her past name day. Traditional Polychronion (“Mnogaia leta”) was sung.

Our Sunday celebration continued at the trapeza table where the Rector and parishioners enjoyed delicious meals and a nice company. 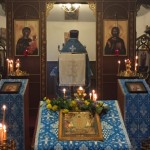 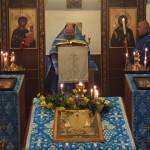 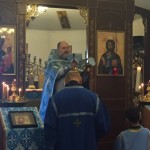 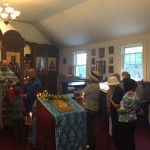 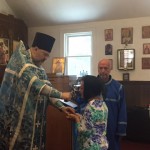 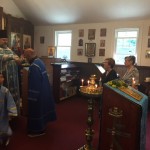