On October 25, on the 21st Sunday after Pentecost, as well as Sunday of the Holy Fathers of the 7th Ecumenical Council, we had a nice celebration in our parish church. Our Rector, Archpriest Igor Tarasov served the Divine Liturgy. Following the readings from the Scripture he preached a homily:

“Today’s first Gospel lesson tells us about the resurrection of the son of the widow of Nain (Lk. 7, 11-16). Reflecting on that event we may conclude that such a miracle happened for two reasons: because our Lord Jesus Christ was the Son of God, and because He was also the Son of Man.”
“First, we have to say that our Lord Jesus Christ is the Son of God, the Divine Word which created the world. As such, Christ had the power to work miracles, restoring the laws of creation as they had been intended before the fall, when there was no sickness or death. Through miracles He showed this power, the unique power of the Son of God.”
“Secondly, this miracle happened because Jesus was also the Son of Man. Christ in His human nature felt compassion on those who were suffering. In this particular case, there was great reason for compassion. In those days a woman who lost her husband, became a widow was likely to have a miserable life unless she was supported by her children. Now the only son of the widow of Nain was the only one who could take care of her. Without him she could become very poor, she could become a beggar and perhaps could die of starvation on the streets.”
“This miracle of the resurrection of the son of a widow was quite unique, unheard of and unseen in human history – only the Son of God could accomplish this. No human healer can raise from the dead. It occurred at His word because Jesus is the Word of God. It also occurred through His physical touch, because only contact with the divine and immortal nature can confer resurrection, the overriding of death. Only immortality can overcome death, only deathlessness is greater than mortality.”
“This miracle shows that the power of the Holy Spirit flows not from, but through Jesus Christ, through His pure and sinless human nature. Both Christ’s Word and Body are life-giving. This was later proved by His own Resurrection. Now since the Church is the Body of Christ, this means that the same power flows through the Church and confers life, healing and resurrection on all who touch Christ in the Church, participating in the spiritual life of the Church.”
“Celebrating today the memory of the Holy Fathers of the 7th Ecumenical Council we need to remember that those were the bishops of the Church who declared certain truths of our faith. And the second Gospel lesson read today which is always assigned for the celebrations of the Fathers of the Councils, tells us about eternal life. In His pontifical prayer our Lord is asking God the Father that His followers may have eternal life. And eternal life is to know the true God and Jesus Christ whom He sent (Jn. 17, 3). Therefore, if we are in the Church then we know the true God and His Son, Jesus Christ. If we adhere to the Orthodox Church and its teaching, we know true God and may partake of eternal life. As the Holy Spirit flows through Jesus Christ, it flows through the Church and bestows His glory to make us able to receive life everlasting.”
“In addition, we may say that today’s Gospel has also certain mystical or symbolic meanings. The widow described in the story is the soul without God. Such a soul is left miserable, poor and begging. It may soon die. The dead son who was carried outside the town to be buried is the human mind which is outside the Church. It is spiritually dead, unable to understand and speak words of reason. It is fit only for the burial of all its mortal ideas and speculations. The coffin in which the body of the widow’s son was placed is the human body, which when touched by God is thus brought to life. Thus it begins to speak divine words, for now it has something to say, it is no longer mute, but is resurrected from the dead. In this way a human body which is touched by God is a mind raised from death, a soul which lives, human nature restored and saved from death.”
“Dear brothers and sisters! Let us ask the Lord to restore us from the spiritual death around us and within us. Many today’s young people being perfectly alive and relatively healthy, are in fact spiritually dead. Their souls sometimes live without God, their minds are very often wander outside the saving gates of the Church and their bodies are often abused by the sins of flesh, by drugs and alcohol. Let us pray so the Lord will wake them up by His life-giving Word and restore them to life by His divine touch as He restored to life the son of the widow of Nain. Let us strive for eternal life which is in our Lord and Savior Jesus Christ!”

After the Liturgy dismissal the Rector preached a short sermon in Russian to stress main thoughts of his English homily. 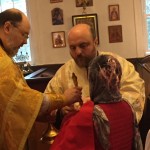 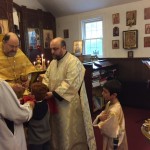 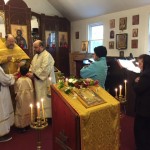 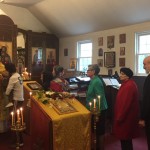