On November 8, on the 23rd Sunday after Pentecost, as well as on the feast of the Holy Great Martyr Demetrius, the Rector of St. George Church, Archpriest Igor Tarasov served the Divine Liturgy in our parish temple. Following the readings from the Gospel he preached a homily:

“Our today’s celebration combines the 23rd Sunday after Pentecost and feast of the Holy Great Martyr Demetrius. In addition, our calendar mentions that on this day the imperial city of Constantinople suffered a terrible earthquake in the year 740 AD. As we mention such a disaster we may recall that 3 years ago our contemporary imperial city of New York suffered a terrible hurricane Sandy. Hundreds of people died in accidents, many houses were flooded or destroyed, a lot of damage done to the areas of the ocean shore. Indeed, it seems that not a day goes by without some natural catastrophe happening and lives lost – here floods, there a hurricane, here a volcano, there an earthquake. And people tend to blame somebody for these losses. Some people blame governments for not being prepared, some blame big companies for changing the earth climate, and very often we tend to blame God. Even the insurance companies called the damages resulting from natural disasters the “acts of God”. Thus, we blame others but not ourselves. Like children we argue that “it isn’t our fault”. Such a way of thinking is not the way of the Holy Gospel.”
“In today’s Gospel, Lazarus did not blame anyone for his poverty and misery. He never blamed the kings and the rulers or some other human forces for his state. And he never blamed God. He did not even reproach the rich man for his meanness. No, he accepted his situation in humility. And because of his humility he went to heaven, to the bosom of Abraham.”
“As for the rich man, he never thought of thanking God for his wealth. He did not show his gratitude to God by caring for the poor men at his gate. He had only hard-heartedness, allowing Lazarus to die at his gates, surrounded by stray dogs who licked Lazarus’ sores, while he was feasting. And because of his hard-heartedness he went down to hell.”
“Now we may ask: what is the spirit of the Gospel tells us about different catastrophes in the world? Why does God allow natural disasters to happen? And who is to blame? The answer is: man himself is to blame, simply because man does not ask God for catastrophes not to happen, because man does not accept God’s power. Man does not seek God’s protection through prayer and repentance, through confession and Communion. Man has persuaded himself through modern technology that he is so smart that he can live without God. But modern man has so blinded himself with his intelligence that he forgot that he can do nothing to protect himself from the natural elements, only God can do that. Modern man so blinded himself that like the rich man in today’s Gospel, he cannot see Lazarus starving in agony at his gates.”
“On the other hand, it is also true that there could be many more natural disasters. Why not the whole cities and lands are being destroyed by earthquakes? Why not whole countries are being consumed by tidal waves? Why has the earth survived for so long despite the accumulation of human sin? Why God is so patient that He does not allow all these things to happen? Only because there are those who prayed and continue to pray. The Mother of God keeps interceding for us. The Saints like Holy Great Martyr Demetrius continue to pray the Lord being in front of Him in heaven. And the righteous people living on earth keep praying for the peace of the whole world and for the salvation of all. This is the only reason why we are still here. The world hangs by the thread of prayer.”
“The world is run not by governments, or politicians, or generals, or businessmen. In reality it is run by prayer and lack of prayer. There will be peace in the world until there is prayer. And we too shall perish like the rich man unless we pray, unless we hear to Moses and the Prophets and unless we truly follow the One Who is truly risen from the dead, Christ our True God.”

Since there was no services on the previous day which was the St. Demetrius Memorial Saturday, the Rector proclaimed the Litany of commemoration of the deceased which is not usually taken in our parish on Sundays.

After the Liturgy dismissal the Rector reminded parishioners to pay their parish dues for the current year. 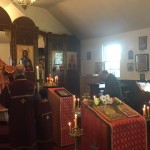 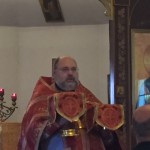 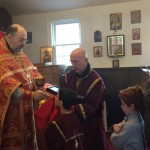 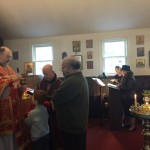 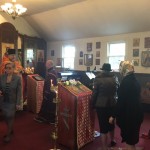 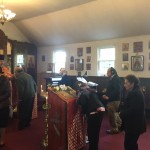