On December 27, on the Sunday of the Holy Forefathers, we had a nice celebration at St. George Church. Our Rector, Archpriest Igor Tarasov served the Divine Liturgy. Following the reading from the Holy Gospel he preached the following homily in English:

““Many are called but few are chosen” (Lk. 14, 24). This is the main idea of today’s Gospel lesson. Taking the whole history of mankind, we may say that not many people were chosen by God to be blessed. We may examine that by recalling how different people knew the true God and kept that precious knowledge.”
“Some nations conserved a dim memory of events of the human past. In Australia the Aborigines kept a vague memory of how God created the world perfect, which they call the “Dreamtime”. All over the world, from Asia to South America, some 120 different nationalities and cultures have kept the memory of a great, universal flood, which is known to us in detail through the Bible. In India the Hindus long ago kept an intuition of God as a Trinity, but that knowledge of God became so twisted that their trinity is a trinity of destructive gods. Other peoples fell even further and began worshipping stones and trees, rivers and mountains, mistaking creation for the Creator. Our ancestors, Eastern Slavs, were among those nations. They worshiped forces of nature, but even doing so they made the idols of those gods who represented those forces. This was the pagan world, especially before the coming of the Savior.”
“Many were called but few were chosen, for among all these nations and cultures, there were representatives of one nation who conserved the true history of mankind. This nation were the Jews, the chosen people, and today we commemorate all the righteous among them, our forefathers in the Faith. From Adam and Eve on, there were among that people righteous and holy men and women. In their lives they showed the image of the life of Christ or foresaw Christ by their lives. Speaking in theological language, we say that they are a “prefiguration” of Christ.”
“Abel, who was killed by his brother Cain, is a prefiguration, an image of Christ, who was also murdered by men. Melchizedek the priest is the prefiguration of Christ the High Priest. Enoch and Elijah, who were taken up to heaven, prefigure Christ who was also taken up to heaven. Noah, whose family alone survived the Flood, is a prefiguration of Baptism given to us by Christ. Job the Long-suffering prefigures the long-suffering of Christ. Abraham, who was asked to sacrifice his son Isaac, prefigures the sacrifice that God the Father made with His Son. Jacob prefigures Christ, for he saw the ladder that connects earth to heaven, enabling heaven to come down to earth and earth to rise up to heaven. Joseph, who was betrayed by his twelve brothers, prefigures Christ who was betrayed by His disciples. Moses saw the burning bush unconsumed, which is the Virgin’s womb, which was unconsumed by the fire of Christ. Joshua, whose name is the same as Christ’s, that is Jesus, the Savior, prefigures Jesus the Deliverer of His people. David, related by blood to Christ, saw Christ in the Psalms. Prophet Daniel saw the Holy Trinity through the Three Holy Youths in the furnace of Babylon. Prophet Isaiah saw Christ the suffering Servant. Prophet Jonah prefigures the three-day burial of Christ through his three-day stay in the belly of the whale.”
“All these holy Forefathers together with our holy Foremothers, Sarah, Rebecca, Ruth, Deborah and many, many more – all these we commemorate today. All these are our spiritual family, for long before we were born they saw the One Whom we confess, Christ our true God Who is risen from the dead.”
“Let us in these last few days before the celebration of the Birth of the Savior, read one, or at least one part, of the writings about them, the books of the Old Testament, like Genesis, Exodus, or simply the Psalms, and let us renew our links with our ancestors in the Orthodox Faith.”
“Let us exclaim today in prayer, “Holy Forefathers and Foremothers of Christ, pray to God for us!””

After the dismissal of the Liturgy the Rector preached a short sermon in Russian to name the main thoughts of his English homily.

Following the liturgical service the Rector and parishioners enjoyed delicious meals and an interesting conversation during the coffee hour. 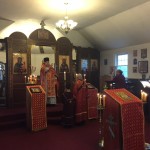 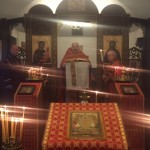 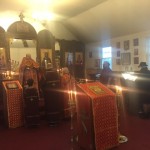 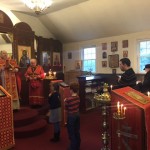 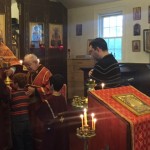 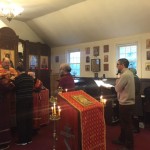