On January 10, on the Sunday after the Nativity, we had a nice celebration at St. George Church. Our Rector, Archpriest Igor Tarasov served the Divine Liturgy in our temple. After the reading from the Gospel he preached the following homily in English:

“On this Sunday after Christmas we have to learn what happened very soon after the Birth of Christ on the earth. Today’s Gospel lesson is telling us that after the departure of the Wise Men the Holy Family had to flee to Egypt because king Herod was looking for the Child Jesus to destroy Him (Mt. 2, 13). So, right after the joy of having Her first-born Child, Blessed Virgin had to run and hide. This gives us a very common picture of the life in this sinful world where fallen human nature, human envy and hatred, human lust for power and wealth do not allow to live peacefully, but, on the contrary, spoil the lives of others and tend to destroy it.”
“King Herod represents all human corrupt rulers who desire to preserve their power at any cost. Herod knew that the Messiah was to come into the world. However, his own power was more important for him than salvation of his own people. And when Jesus was born and the Wise Men came to search for him, Herod became very disturbed (Mt. 2, 3). Instead of being excited about the Birth of the Messiah, he was worried that this little Child could take over his throne. Today we hear from the Gospel that Herod became angry after being deceived by the Wise Men who did not tell him about the place where the Child Jesus was. So he sent to kill all the infants in Bethlehem from two years old and under (Mt. 2, 16). The history of mankind is full of the examples of many Herods who sacrifice their own people, who shed innocent blood in order to strengthen their power. They do not care for spiritual matters but only use them to support their dominion.”
“But we may say that the Christmas story represents the whole human society, gives us a picture of the human world. We said that we see Herod, a ruler who is obsessed with his power. But we also see other kinds of people. We see the shepherds. They become worthy of the appearance of the Angels who proclaim the joyful news to them – that the Savior is born. And the shepherds rush to the cave to worship Him. This is an example of simple, sincere and pious people who are blessed by God. We should now recall that from the beginning of humanity God loved the shepherd. Righteous Abel was a shepherd and God blessed his sacrifice. Thus shepherds are the devout people who sincerely love God.”
“In the story of the Nativity we see the Wise Men. These were the astrologers, the scientists of their age. Many of them were serving false gods, practicing magic and sorcery, but those three wise men described in the Gospel were looking for the truth. And being led by the star of Bethlehem they found the true Savior of the human race, the Child Jesus. Thus those wise men represent the scholars who look for the truth, who search for God.”
“Finally, we see the Holy Family. Especially, the head of the household, righteous Joseph the Spouse. He humbly fulfills his duty to care and protect the Holy Family. Being advised by the Angel of the Lord he accepted Mary when She was pregnant. Now, again, advised by the Angel he takes the Child Jesus and His Mother and flees to Egypt. We may only imagine how hard it was for him and for the Holy Family to leave their native country and to go to the different land. But they did so in order to preserve the future Savior of the world. Therefore, St. Joseph represents a worthy and decent man who is fulfilling his obligation of taking care of the family, who protects his spouse and his children.”
“Therefore, dear brothers and sisters, the Nativity story shows us the human race in different types of people. And we need to imitate some of them and avoid the attitude of others. We need to imitate the shepherds in their sincere trust to God, in their simple but fervent faith. We need to imitate the wise men in their love for knowledge but combined with the search for spiritual truth, the longing for God. And when they found God, found the Child Jesus they presented Him with the gifts. We also should give the Lord our own gifts – gifts of material nature like gold, gifts of spiritual nature like incense and gifts of moral nature like myrrh. But we have to avoid the attitude of Herod, the attitude of sin, evil desire and lack of love. Like those Wise Men who did not return to Herod, we should avoid being in contact with such people or such powers in the world, but to worship the true God, our Lord Jesus Christ born for us in a manger but who will rule the universe and redeem it.”

After the Liturgy dismissal the Rector preached a short sermon in Russian to convey the main ideas of his English homily.

Following the sermon the Rector congratulated our parishioner and altar server Joseph Kay on the occasion of his name day and wished him God’s blessings and protection of his heavenly patron, righteous Joseph. Traditional Polychronion (“Mnogaia leta!”) was sung.

After the liturgical celebration the Rector and parishioners enjoyed delicious meals and a nice company at the trapeza table during the coffee hour. 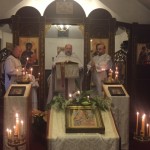 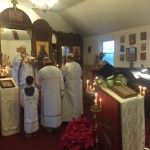 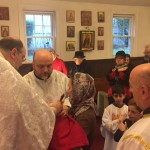 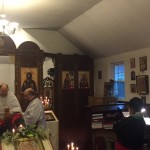 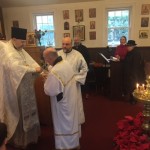 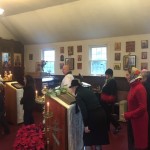