On Saturday March 12, clergy of the Eastern States Deanery of the Patriarchal Parishes in the USA gathered at St. Nicholas Church in Bayonne NJ to hold a Deanery Meeting.

After an abundant meal prepared by the parish, Fr. Igor opened the meeting and expressed his gratitude to all those in attendance. The clergy finalized the schedule of the traditional Lenten Vespers held during Great Lent as well as other administrative and pastoral issues. 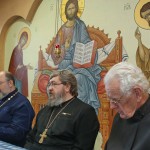 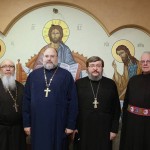