On March 16, on Wednesday of the first week of Lent the Rector of St. George Church, Archpriest Igor Tarasov served the Compline with the reading of penitential Canon of St. Andrew of Crete.

This Canon is composed as a conversation of a person with his own soul. It reveals that often we imitate sinners mentioned in the Scripture but do not wish to follow the steps of the righteous ones. It also calls us to bring the fruits of repentance and not to exalt ourselves.

Following the service the Rector preached a brief sermon about the meaning of penitential Canon. He pointed out that the Canon teaches us to examine our conscience and to fight passions and sins. This warfare is very hard. Fr. Igor referred to the sermon recently preached by His Holiness, Patriarch Kirill who said that very often our soul resembles a field where the tares grow along with the wheat. It is difficult to pull out all the tares. And we should not fight the greatest sins first because we may lose our strength as an army fighting the strongest enemy at once could lose all the resources. It is more suitable to fight lesser sins and to achieve a victory over them, and then attempt to fight the greater ones. Fr. Igor concluded his sermon saying that Lent is very helpful to give us strength needed to lead such an important warfare in order to be saved. 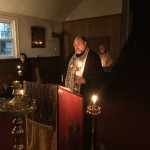 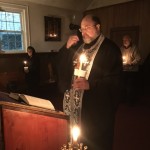