On April 3, on the Third Sunday of Lent dedicated to the veneration of the Holy Cross we had a beautiful service at St. George Parish. Our Rector, Archpriest Igor Tarasov served the Divine Liturgy.
Before the reading of the Hours the Rector solemnly transferred decorated cross from the altar to the middle of the church and placed it on the stand.
During the Divine Liturgy, following the lessons from the Scripture Fr. Igor preached the following homily in English:

“Today we approached the middle of our Lenten journey towards the Holy Passions and Resurrection of our Lord. On this Third Sunday of Lent we venerate the Holy Cross, the precious and life-giving tool of our salvation. In today’s Gospel reading we heard the words of Christ, “Whoever desires to come after Me, let him deny himself, and take up his cross, and follow Me” (Mk. 8, 34). These words mean that every journey of a man to the true God and every way to man’s salvation is the way of the Cross.”
“We know that our Lord Jesus Christ had to make His way of the Cross when He was condemned to death. There was no other way to save the human kind. In the same fashion, there is no other way for us to attain blessed eternity if we do not take up our own crosses and if we do not follow the Lord. But again, thinking of the Lord we recall that after the painful way of the Cross, after the terrible crucifixion, after the death on the Cross, there came glorious and radiant Resurrection of our Lord. Without the Cross there was no Resurrection. This is why today we sing, “Before Thy Cross we bow down in worship, o Master, and Thy holy Resurrection we glorify”. In the same way, without our own crosses there won’t be for us eternal blessedness with the risen Lord.”
“Thinking of the things necessary for salvation, we recall that the first condition for a man to be saved is to receive Baptism. The Lord made it clear saying, “He who believes and is baptized will be saved; but he who does not believe will be condemned” (Mk. 16, 16). But another necessary thing to be saved is to carry the cross. According to Ven. Ephrem the Syrian this is the “second Baptism”. He wrote, “Two baptisms are necessary for the righteous and for the sinners, and one cannot save without another”. Our “second Baptism”, according to St. Ephrem is our sufferings for Christ, our confession of Christ, our life in Christ. This is why we heard in today’s Gospel lesson, “Whoever is ashamed of Me and My words in this adulterous and sinful generation, of him the Son of Man also will be ashamed when He comes in the glory of His Father with the holy angels” (Mk. 8, 38). Thus, not just being baptized and formally declare our faith in Jesus Christ, but a true life in Christ, true confession of Him before other men, before “sinful and adulterous generation” is a condition for our salvation.”
“Throughout the whole history of Christianity those who truly followed the Lord were persecuted. Those persecutions were different but they always took place. Nowadays they are done in many ways. There are fierce persecutions of the Christian people in the Middle East where our brethren in faith are murdered, tortured and killed all the time. His Holiness, Patriarch Kirill recently said that it had been calculated that every 5 minutes a Christian person in the world dies only for being a Christian.  There were one million and a half Christians living in Iraq before all these calamities and wars began in that country. The same amount of Christians used to live in Syria before the war started there. Now only about half a million of them remained in each of these countries. Others were either murdered or had to flee from their homeland. This is why it is imperative for all the Christian people to unite in telling the world about this evil. And this is why our Patriarch met with the Pope of Rome.”
“But, on the other hand, many other forms of persecution are being employed against us. Again, His Holiness recently said that there exists a modern-day heresy of worshiping man. It is a cult of man along with his sins and deviations. It is an idea that the society has to serve man and his desires without serving God. And who does not wish to adhere to this heresy is being persecuted.”
“Dear brothers and sisters! The Lord said, “In the world you will have tribulation; but be of good cheer, I have overcome the world.” (Jn. 16, 33). Let us then be of good cheer! Let us be courageous and no become frightened by those persecutions for after the Cross always comes holy Resurrection. Let us then confess our Lord without being ashamed of Him in this sinful and adulterous generation. Let us take up our cross and follow Christ. Let us follow Him into blessed eternity!”

After the Liturgy dismissal the Rector preached a short sermon in Russian conveying the main ideas of his English homily.

Following that the Rector and altar servers came out of the sanctuary before the stand in the middle of the church and venerated the Precious Cross. 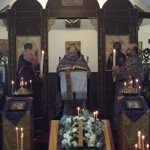 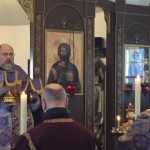 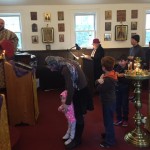 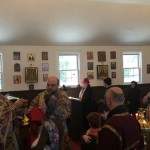 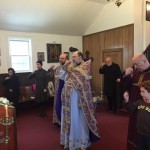 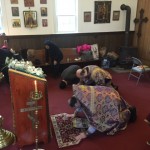