On April 29, on the Holy and Great Friday we had two special services in our parish temple. This day is the most sorrowful day in Christian calendar. On Holy Friday we commemorate crucifixion of our Lord Jesus Christ, His death on the Cross, as well as His burial. St. George Church’s Rector, Archpriest Igor Tarasov served Vespers with the procession of the Shroud at 4:00 PM. At the end of this service holy Shroud had been solemnly carried out from the altar to the middle of the church and placed there for veneration.

At the end of Vespers the Rector preached a sermon in Russian. He pointed out that the people who surrounded our Lord Jesus Christ at the end of His earthly ministry can be divided into several types. In particular, according to the New Martyr, St. Seraphim, bishop of Dmitrov, those who caused His holy Passions and His death on the cross were Judas, the leaders of the Jews and Pontius Pilate. Judas betrayed the Lord because he was a materialist. Judas was seeking for material wealth and power. When he realized that Jesus is not going to be a powerful earthly ruler, and being with Jesus cannot make him wealthy he betrayed his Teacher. The leaders of the Jews, especially Caiaphas, were rationalists. They used their reason to kill Jesus in order to avoid the anger of the Romans. And Pilate although he knew that Jesus was innocent, could not free him, but let Him be crucified. Pilate was seeking political stability and was not able to act justly. However, there were the people who followed Christ. These were His Blessed Mother, the women disciples who stood beside the Cross, as well as St. John the Theologian. When Jesus died righteous Joseph of Arimathea and Nicodemus came and asked for His body. They buried the Lord. Thus, the Rector called the parishioners to imitate those persons who remained faithful to the Lord and to avoid resembling those who caused His condemnation and death. He also called the parishioners not to crucify Jesus again by inappropriate choices and sinful deeds.

At 7:00 PM the Rector celebrated Matins on the Lord’s Tomb. Most of this service was performed before the Shroud placed in the middle of the church. After the Great Doxologion the Rector, altar servers and parishioners performed the procession around the church. The priest carried the holy Shroud resembling burial of the Lord. 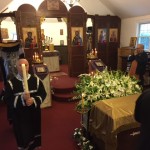 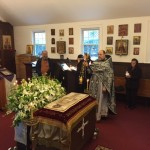 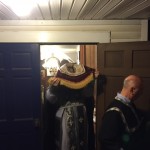 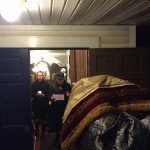