On September 4, on the 11th Sunday after Pentecost, our Parish Family held a nice celebration in our temple. Our Rector, Archpriest Igor Tarasov served the Divine Liturgy. Following the Gospel lesson he preached a homily in English.

Fr. Igor pointed out that in the Gospel lesson assigned for this Sunday the Lord instructs us that we need to forgive our neighbors in order to receive God’s forgiveness. In English language the word “forgive” is connected to the word “give”. Forgiveness is giving of ourselves. Giving is very important in Christianity. In ancient times Christians coming for the Liturgy used to bring different things to the temple. They brought what was needed for the community. This was called “Proskomedia” which translates as offering. Nowadays Proskomedia is limited to the faithful’s giving of the commemoration lists to the priest to remember at the Liturgy. But the Church still needs your donations to support the parish.
But forgiving is even more important than giving because it is not giving of something, but giving of ourselves.

Since on the first Sunday of September the Russian Church holds a special day of prayer for the preservation of God’s creation, during the Litany of fervent supplication the Rector offered special petitions for that cause.

The choir was prayerfully singing the hymns of the Dormition, the feast which had still been celebrated on that day.

After the Ambo prayer the Rector offered a Prayer for the preservation of creation. After that he also offered a prayer for the schoolchildren who begin their new school year. The Rector blessed our children and wished them a successful study and acquiring of knowledge.

Following the Liturgy dismissal the Rector preached a short sermon in Russian explaining the main ideas of his English homily. 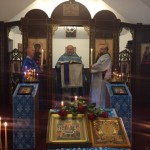 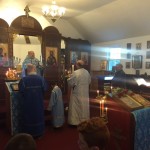 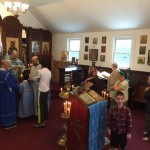 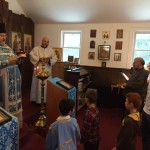 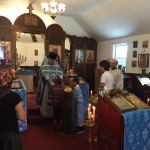