On October 2, on the Sunday after Exaltation, we had a beautiful service in our parish temple. The Divine Liturgy was celebrated by our Rector, Archpriest Igor Tarasov. Following the Gospel lesson he delivered the following homily in English:

“Dear brothers and sisters! Today we celebrate Sunday after the feast of the Exaltation of the Cross. Our Lord teaches us in today’s Gospel that His every true follower has to deny himself and take up the cross (Mk. 8, 34). Thus a Christian life requires a sacrifice and an endeavor.”
“A lot of us grew up listening to stories of heroes who sacrificed themselves for their country. They were often about heroes of different wars, especially the Second World War. Sometimes, we heard about people in other countries and even some of the Church’s Saints. But whatever we heard, we may notice that all these stories teach us courage, patience, hard work and self-denial. In some cases, the hero gave his or her own life to save others.”
“Our Savior, Jesus Christ, explained how all of us can be heroes of self-sacrifice. He taught this in today’s Gospel saying that by saying that whoever wants to be like Christ must deny himself, take up his cross and follow Him. Whoever wants to save his life will lose it, but whoever loses his life for Christ and the Gospel will save his life. And whoever is ashamed of being with Jesus (in or out of church) and ashamed of His teachings will be rejected by Christ when He returns on Judgment Day.”
“In some instances, a person sacrifices all his or her life to some noble cause and lives to fulfill it. This is seen in many men and women who dedicate themselves to the monastic life. This is also seen when a young mother decides to raise a child without any help from her relatives and renounces her own personal or professional life for this child. But self-denial may also lead to the ultimate sacrifice, not to dedicating, but to losing one’s life in the name of the Gospel. Our calendar is full of different Saints, especially the Holy Martyrs who lost their lives for Christ and for the Gospel.”
“Today we commemorate my patron Saint, Holy faithful prince Igor who lived in the XII century. Although he is not a clear example of a person who died for Christ, his tragic destiny showed how the words of today’s Gospel are true. St. Igor became the Great Prince of Kiev at the time of a cruel struggle for the Kievan throne between the two princely factions. He belonged to one of them and he was placed on the throne of Kiev by that group. But after being betrayed by his own subjects who kissed the cross to be faithful to him, after losing a battle to his enemies and after being held captive, St. Igor agreed to renounce this world and to become a monk.  He probably understood the words of Christ who said, “What will it profit a man if he gains the whole world, and loses his own soul?” (Mk. 8, 36). The power of a prince which he lost so fast, and the throne of Kiev which was taken away from St. Igor – all this proved that there is no profit for a man to gain anything if he loses his soul. Therefore, St. Igor being tonsured a monk, decided to retire from the political struggle and to spend the rest of his life in endeavors of piety. However, the evil people from the Kievan nobility decided to kill the prince-monk. They incited the mob who attacked St. Igor in the church, during the Divine Liturgy, seized him and tried to murder. He was first rescued by his brother, but the mob chased Igor further and finally brutally killed him. As I said, although St. Igor did not die for Christ sake, he did die because of the evil which overcame human nature of his enemies. Those people did not wish to follow Christ because they did not deny their sinful nature, their evil desires and cruel passions. A Christian should understand that political, social and other preferences are not so important as our spiritual life. Nowadays people tend to be very passionate about their political preferences or social views, making others who hold different views their enemies. Hostility and enmity became a usual attitude. But we should understand that this leads us to a sinful passion. And we should avoid that attitude remembering that our political positions should not interfere with our spiritual life.”
“Remembering about the Holy Martyrs honored by the Church we should also remember that there are also persecutions and murders going on at this minute. Christians are harassed and killed all the time all over the place. This is not new, but it is a new manifestation of an old hatred of Jesus and His Church and His Gospel.”
“Dear brothers and sisters! Let us understand our true calling, a calling of a Christian. It is to deny ourselves, to deny our sinful nature, an evil nature and passions. Let us take our crosses by fulfilling our duties and being patient in our lives. Let us follow Christ who Himself is the Way to the Kingdom of God, the Kingdom to which we can come by the way of the Holy Cross.”

The choir prayerfully performed the hymns dedicated to the Holy Cross, as well as to St. Igor commemorated on that day. We were glad to welcome the guests from St. Nicholas Church in Whitestone, Thomas and Alexandra Zedlovich who joined our choir in singing during the service.

After the dismissal of the Liturgy our parish Warden, Olga Roussanow congratulated the Rector on the occasion of his name day presenting Fr. Igor with a gift. Traditional Polychronion (“Mnogaia leta!”) was proclaimed.

After being greeted on his name day the Rector also congratulated our parishioners Vera Koretz and Sophia Kay on the occasion of their past name day and proclaimed the Polychronion for them.

Our celebration continued at the trapeza table where the Rector and parishioners, along with some guests of the Parish, enjoyed delicious meals and an interesting conversation. The toasts to Fr. Igor, as well as for Vera and Sophia were raised. 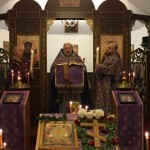 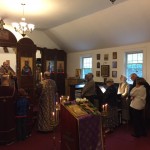 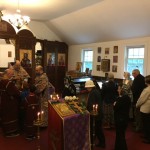 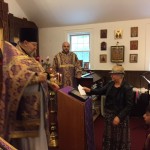