On October 16, on the 17th Sunday after Pentecost we at St. George Church also celebrated feast of the Protection of the Most Holy Mother of God transferred to the following Sunday. Our Rector, Archpriest Igor Tarasov served the Divine Liturgy. After the readings from the Holy Gospel he preached the following homily in English:

“Dear brothers and sisters! Today, we celebrate feast of the Protection of the Most Holy Mother of God. We commemorate our Lady’s miraculous appearance in the church in Constantinople and saving of the imperial city from the attack of the enemies happened in the 8th century. The two holy men, Andrew and Epiphanius saw the Holy Mother of God appearing in the temple and covering the city with Her veil. After that the city was spared and the enemies retreated. This was a remarkable example of the special intercession of the Blessed Virgin for the Christian people.”

“We should always remember to honor the Most Holy Mother of God and pray to Her in our needs. And we have to remember that we will receive according to our faith and devotion. We must show the zeal and piety in order to attain help.”
“Our times are no less troublesome for the Church and Christian people than the times when the celebrated event of the Protection took place. The holy city of the Church and Christian civilization is now under attack from many enemies. Especially it is attacked from the two most dangerous sides. On one side it is being attacked by today’s liberal and godless society which demands the Church to renounce her spirit and the teaching of Christ in favor of the ideals of fallen and sinful humanity. On the other side Christian civilization is being taken over by the Muslims who come to live to Christian countries and wish to influence them by their faith. It is no secret that Muslims are also involved in the most of the acts of terror.”
“Considering these two challenges we Christians face in today’s world, we should ask ourselves a question, “What is so different about us that other people would see that we are right?” Or, “What can we offer to this world, so others could follow us, instead of following the false calls of our challengers?” Today’s first Gospel lesson is giving us an answer. Our Lord says, “If you love those who love you, what credit is that to you? For even sinners love those who love them.  And if you do good to those who do good to you, what credit is that to you? For even sinners do the same. And if you lend to those from whom you hope to receive back, what credit is that to you? For even sinners lend to sinners to receive as much back. But love your enemies, do good, and lend, hoping for nothing in return” (Lk. 6, 32-35). If we follow what the Lord said we make a difference in the world.”
“In today’s world everybody is looking for an average. We hear that constantly: the average American, the average husband, the average wife, the average child. If you think of that you may learn that averages are dangerous. A man who trusted the average data tried to make across the river whose average depth was two feet. He drowned in water twelve feet deep! But we are told that average means normal. On that basis the people are told that pre-marital sex is normal while self-control, chastity and virginity are abnormal because an average young person engages in pre-marital sex. We are told that an average husband is unfaithful, so infidelity in marriage is normal while being faithful is abnormal. If an average person is doing it, no matter what it is, it becomes normal. The average thus becomes our idol whom we worship at the altar of public opinion.”
“Our Lord Jesus Christ calls us to be not average but above average. If an average person loves those who love him, we ought to do more. If an average person lends to those from whom he expects to receive back, we need to do more. If an average person loves his friends and hates his enemies, we ought to love both our friends and our enemies. Are other people, for instance the Muslim people, righteous? We Christians are called to be more righteous. Are the Muslims generous? We are called to be more generous? Are the liberals in our society understanding and tolerant? We are called to be more understanding and more tolerant. For this reason the Lord called His disciples the light of the world, the salt of the earth. The Saints were not average. They were above average.”
“Especially all these things are true about the Most Holy Mother of God. She was certainly way above the average. And this is why She is now our Protectress in heaven. And our second answer to the questions we ask should be the following. We may prove that we are different and can offer something others cannot offer to this world. We may prove it by offering our prayers to the Most Holy Mother of God, by venerating Her and by asking Her to cover the whole sinful world by the veil of Her Protection.”

Before the Communion of the faithful choir beautifully performed the singing of the hymns dedicated to the Protection of the Mother of God.

Following the Liturgy dismissal the Rector along with the altar servers performed a rite of Glorification in front of the icon of the feast singing the troparion, kontakion and magnification of the Protection.

The Rector also preached a short sermon in Russian addressing the main points of his English homily. He also called the parents bringing their children to the church to teach them to behave properly during the Divine Liturgy, especially at the most solemn moments of the service.

Our celebration continued at the trapeza table where the Rector and parishioners enjoyed delicious meals and a nice company. 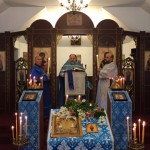 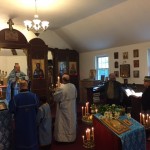 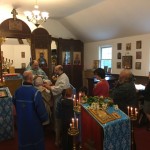 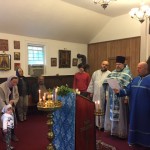