On October 30, on the 19th Sunday after Pentecost, Rector of St. George Church, Archpriest Igor Tarasov served the Divine Liturgy in our parish temple. After the reading from the Holy Gospel he preached the following homily in English:

“Dear brothers and sisters in Christ! Today’s Gospel lesson is telling us a very famous parable about the sower who went to sow seeds (Lk. 8, 5-15). As the Lord Himself interpreted that parable, the seed is the Word of God. It is sown in the good soil of human minds and hearts and it bears fruit a hundredfold. But not all soil is able to receive the seed. And the Lord gives us a certain classification of four different kinds of soil. One of them is good while three other kinds are not. Today we will attempt not to discuss those types of soil, but to focus on the words of Jesus at the end of the parable: “He who has ears to hear, let him hear!” (Lk. 8, 8).”
“There is a story of a woman who was convinced that most people at the social gatherings don’t really listen to what is being said to them. She decided to test her theory. Engaging in small talk at a party, she said cheerfully to another person, “By the way, just before leaving my house, I shut my husband”. “Oh, really?” came the reply, “How nice for you, dear…””
“Jesus has much to say about hearing in today’s Gospel lesson when He calls those who have ears to hear. Speaking about sowing of the Word of God in today’s parable He teaches that we do not all listen attentively. Our heating is defective. There are thorns and rocks that have to be removed; hard soil that has to be plowed. Hearing demands attention. It requires shutting out the distractions of the world. In order to hear the Word of God it is also important to have an inner ear attuned to His voice. “My sheep hear My voice, and I know them, and they follow Me,” said Jesus (Jn. 10, 27).  So, the life of God within us begins only with the sound of His voice. And our faith is born from the hearing of the Word of God. Holy Apostle Paul said, “So faith comes from what is heard, and what is heard comes by preaching of Christ” (Rom. 10, 17).”
“There was a meaningful custom in the early Church, a special rite of the Opening the Ears of the Catechumens (those who were preparing for Baptism). St. John Chrysostom mentions that saying, “By grace of this sign your spiritual ears will become receptive to the word of God; you will understand the mysteries about to take place, and become sensitive to the fragrance of the Spirit”. Nowadays we do not have that custom but similar ritual we still preserve in our rite of Baptism. When the priest anoints different parts of the body with holy oil, he also anoints the ears saying, “May his ears be for the hearing of faith”. It is necessary for us to keep our ears open for the hearing of faith. We also need to pray that the Lord may unstop our ears, keep them open, that we may be sensitive to the voice of God in our lives.”
“Dear brothers and sisters! We have two kinds of ears: the outer ear and the inner ear, the physical hearing and the spiritual hearing, the ear of the mind and the ear of the heart. The Rite of the Opening of the Ears was designed to open the inner ear, so we might listen to God’s word not only with the mind, but also with the heart.”
“There is an old story about someone who went to heaven and saw a lot of what looked like dried mushrooms. On closer look he discovered that they were human ears. They were the ears of people who on earth went to church, listened with pleasure to the word of God, but did nothing about they heard. The word of God never got beyond the ear. It never penetrated the mind and heart to become a life dedicated to the service of God. The result was that after death only their ears were saved; only their ears reached heaven. “He who has ears, let him hear!””
“It is sad to say that some people attend the church for years but do not really pay attention to what is being said, proclaimed or preached in there. In our parish there was an occasion when someone did not notice that we had the Lord’s prayer proclaimed, did not notice it because it was done in Georgian language!”
“Therefore, dear brothers and sisters, since we have ears, let us hear. Let us open our ears, especially our inner, spiritual ears to receive the word of God. Let us allow His word to grow in us and to produce a rich fruit. Let us prepare our hearts as good soil for the seed of the Word of God sown, so it can bear fruit a hundredfold!”

After the dismissal of the Liturgy the Rector preached a short sermon in Russian to stress the main points of his English homily. He also reminded parishioners that on the next day, October 31, the Church commemorates Holy Apostle and Evangelist Luke. Since our secular world engages in the non-Christian celebration of Halloween and many people on that day participate in the works of darkness, the Rector encouraged faithful to answer that challenge by spending that day in reading the Gospel of St. Luke.

Since October 30 is the Day of Remembrance of the Victims of Political Repressions in Russia, some parishioners desired to have a Memorial service performed following the Liturgy. The Rector served the Litia to commemorate all Christians killed or persecuted under the Communist regime in former USSR.

After all our services were finished, we enjoyed delicious food and a nice company during the coffee hour. 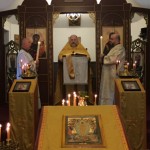 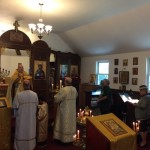 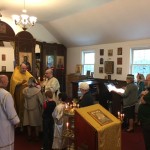 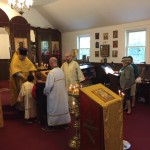