On November 27, on the 23rd Sunday after Pentecost, St. George Parish held a beautiful liturgical celebration. Our Rector, Archpriest Igor Tarasov headed the Divine Liturgy. Following the Gospel lesson he preached a homily in Russian. An English translation of that homily is as follows:

As the Liturgy continued, the Rector included a petition of thanksgiving into the Litany of Fervent supplication due to our recent celebration of Thanksgiving Day. The choir prayerfully performed the hymns dedicated to Holy Apostle Philip whose memory was celebrated on that day.

After the Liturgy dismissal the Rector preached a short sermon in English to stress the main ideas of his Russian homily.

Following the Liturgy the Rector served a Memorial service (Litia) at the request of Malyshew family to commemorate the deceased Elena, the late wife of our parishioner and Sacristan Andrew Malyshew.

After all our services had been finished the Rector and parishioners enjoyed delicious meals, including a Thanksgiving turkey, at the trapeza table. 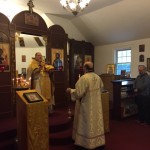