On January 19th Orthodox Church celebrates great feast of the Theophany, or Baptism of the Lord. Our parish had a beautiful celebration of that holy day conducted by our Rector, Archpriest Igor Tarasov. He served the Divine Liturgy in our temple. Following the Gospel lesson the Rector preached a homily in Russian.

In his homily the Rector pointed out that according to the words of the Gospel “no one has seen God at any time. The only begotten Son, who is in the bosom of the Father, He has declared Him” (Jn. 1, 18). Only our Lord Jesus Christ manifested God to the people. And such appearance of God occurred at the Baptism of Christ. God one in the Holy Trinity had appeared during that event.
Jesus condescended to us, the sinners, accepted a visible image of repentance, willing to be baptized in order to help us to do proper repentance. Because we do know that we need to repent, but we possess no proper spirit to perform it. The Holy Spirit is assisting us, the weak and the sinners. We do know what is the will of God, but the voice of God is now being heard in our hearts sanctified by the holy Baptism, as it was heard from heavens at the Baptism of Christ: “This is My beloved Son in Whom I am well pleased” (Mt. 3, 17).
St. John the Baptist said that he is unworthy to touch the sandals of Christ because the greatness of the Son of God is in His service to the human kind. Each one of us could serve his neighbor; someone could even lay his life for his friends. But only God who became Man could bear the sins of all of us and the sins of each one. And only He is able to grant us His true grace to change our lives. For He united divinity and humanity, and through Him we became the dwellers of heaven, because He opened for us His eternal heavens and granted us eternal salvation. We only need to be faithful to Him, to keep the Orthodox faith and to come to the temples for prayer, asking His grace in our daily life.
Being in the temple of God we possess a great happiness because Christ is now with us. And we not only touch His sandals – no! We partake of His Most Pure Body and His Precious Blood. And He stays with us sanctifying and comforting us.

Following the Liturgy dismissal the Rector and the altar servers came before the icon stand and performed the rite of glorification singing the troparion, kontakion and magnification of the Theophany. Then Fr. Igor congratulated parishioners on the occasion of the great holy day. 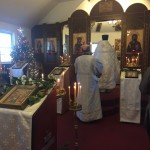 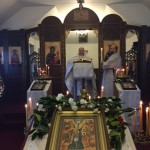 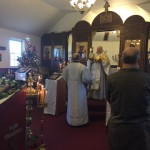 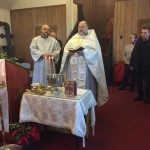 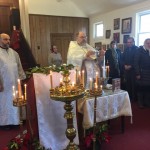 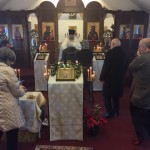