On March 18, on the 3rd Sunday of Lent when we venerate the Holy Cross, priest Igor Tarasov served the Divine Liturgy at St. George’s Church.
Since there was no Matins served in the temple, the decorated Cross was solemnly transferred from the altar and placed in the middle of the church right before the 3rd Hour.
During the sermon Fr. Igor compared today’s Sunday with a stop under a shadow of a tree made by a person on a journey. In the same way on our way of the Lenten pilgrimage we have this Sunday of the Cross as a comfort and refuge in our journey toward holy Pascha. Fr. Igor then continued his lectures on Divine Liturgy. He explained the rite of the kiss of peace, its origins and its practice in our Eastern Orthodox Church, as well as among Western Christians. He further told about the meaning of the exclamation “The doors, the doors, in wisdom let us attend”. The real sense of those words which sound a little strange in our times goes back to the history of the ancient Church when the doors to the place of worship had to be secured. In addition, the catechumens and unbaptized persons were not allowed in the temple during the celebration of the Eucharist. Therefore the deacon signaled the doormen to watch the church doors. Fr. Igor finished his talk discussing the Nicene Creed sung at each Divine Liturgy.
At the end of service Fr. Igor said a short instruction on the significance of the Holy Cross in Christian Church and culture. He expressed a great concern, a disturbance common to all the Orthodox regarding a recent decision of the British government to allow the employers to prohibit their employees to wear a cross on the neck. “This is a clear attack on Christianity because other religious groups such as Muslems and Sikh are allowed to wear their headdresses even if they serve on the British police force. It is surprising for Britain which has a combination of the plain Cross and St. Andrew’s Cross on its national flag,” – said Fr. Igor. The Rector called all the parishioners to adhere to the Holy Cross of Christ, to venerate it and not to be ashamed of wearing the crosses and also of making the sign of the cross everywhere when it is appropriate to do, for instance, when we pass an Orthodox church. He said: “Let us remember what our Lord said about those who will be ashamed of Him: ‘For whoever is ashamed of Me…of him the Son of Man also will be ashamed when He comes in the glory of His Father with the holy angels.(Mk. 8, 38)’. Thus, let us not be ashamed of our Lord and Savior.”
Service was ended with the veneration of the Cross.
Following the services the parishioners enjoyed coffee and some lenten refreshments. 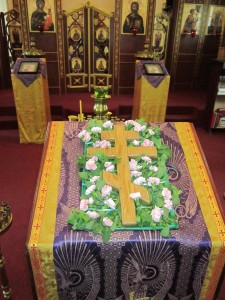