After a delicious supper served at the parish hall Fr. Igor opened the meeting and expressed his gratitude to all those in attendance. The Dean welcomed Priest Aleksiy Paranyuk as a new clergyman of the Deanery who was appointed Rector of St. John the Baptist Parish in Little Falls in August, 2016. Fr. Igor also welcomed the two newly-ordained deacons, Fr. Andrew Masey and Fr. Nicholas DeGraaff. They serve in our parishes in Hackettstown and Garfield.

The clergy further discussed a number of administrative and pastoral issues which concern our Eastern States Deanery. 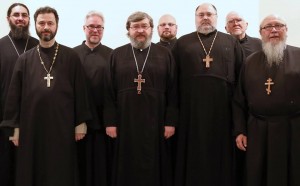