On April 1, on the 5th Sunday of Lent priest Igor Tarasov served the Divine Liturgy at St. George’s Church. On this Sunday we commemorate Venerable Mary of Egypt. Fr. Igor mentioned today’s Saint at the beginning of his homily. He then went on lecturing on the Liturgy. He explained the meaning of the Seraphic Hymn sung at the Anaphora. That hymn contains glorification of the Holy Trinity taken from the revelation to the prophet Isaiah (“Holy, Holy, Holy Lord of Sabaoth”) and a greeting of Jesus Christ made by the people of Jerusalem at the time of our Lord’s triumphal entry into the city (“Blessed is He Who comes in the name of the Lord. Hosanna…”). Due to the importance of such a moment of the Liturgy faithful present in the temple should be very attentive. All unnecessary movements and actions should stop. On the weekdays people should kneel down when this hymn is sung.
Following the dismissal of the Liturgy our Rector had a short sermon about St. Mary of Egypt. “This is an example of one of the greatest sinner who became one of the greatest Saints. This example teaches us that there is no sin that cannot be forgiven if a sinner is truly repenting. We are all sinners, even though many of us may say that we are lesser sinners than Venerable Mary was before she converted. Our sins may not be truly evaluated by ourselves. Therefore, we need true repentance, we need to use the gift of the Mystery of Penance given us by the Lord. And we have no need to go to the desert as St. Mary did. Of course, in today’s world which is very difficult, we may say, ‘I want to go to the wilderness’. But we are called to live in the world to make it a better place.” – said Fr. Igor. He also recalled an example from the life of another great desert Saint, Venerable Anthony the Great. St. Anthony was given a revelation that he can find a person who is holier than him. The Saint was led to the big city of Alexandria where he found a simple man (not a cleric or monk) who prayed and considered himself worse than other people. “Thus, living in the world but being truly humble and pious we may obtain salvation and holiness,” – said Fr. Igor. 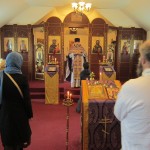 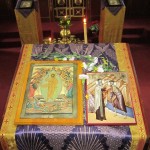