On April 23, on the Sunday of Antipascha, also known as Sunday of St. Thomas, we had a nice service at St. George Church. Our Rector, Archpriest Igor Tarasov served the Divine Liturgy in our temple. Following the Gospel lesson he preached a homily in Russian.

In his homily the Rector pointed out that today’s Sunday is teaching us about the importance of faith in God and in His love towards mankind. Holy Apostle Thomas had doubts about Christ’s Resurrection and required a proof of that. And he was given an opportunity to believe that Jesus was truly risen. Unfortunately, many people in today’s world do not believe and demand proofs of the existence of God, of the validity of Orthodox faith and of other supernatural things. The difference between many of them and St. Thomas is that St. Thomas wished to believe while they often do not. For many such people no proof can be working. But if we, who wish to believe, look at the visible world around us, we may see many proofs of the existence of the Creator.
A European man was crossing the desert with an Arab guide. Day after day the Arab prayed during that journey. One evening the unbelieving European asked him, “How do you know that there is God?” The guide replied: “How did we know that this morning that it was a camel and not a man that had passed our tent while we slept?” The European man laughed and said: “We could tell it by the print of the hoof in the sand. That print was not from a foot of a man”. The guide then looked at the West where the setting sun threw shafts of red and gold and purple into the vaulted canopy of heaven, and pointing toward the sun, he said: “Neither is that the footprint of a man”.
The world around us is filled with the footprints of God! Every sunset, every sunrise, every tree, every flower that is blooming at this time of spring, every lake, every blade of grass, every twinkling star – is a footprint of our Creator. The Scripture tells us: “The heavens declare the glory of God; and the firmament shows His handwork” (Ps. 19, 1).
But God has not left us only His footprints. He has revealed Himself to us through His only-begotten Son who lived among us, who died on the cross and who was risen from the dead. The footprints of the setting and the rising sun may tell us that God exists. But only the nailprints in the hands of the Savior can tell us that God is Love. Jesus appeared to the Disciples, and to Thomas, showing them the wounds in His hands and side – wounds that were proof of His love; wounds that were the proof of His victory over death and evil; wounds that were the proof of our future blessedness in Heavenly Kingdom.
Therefore, we need to keep and to cherish our faith and to resemble St. Thomas – not necessarily in his unbelief, although we may have doubts, God will certainly give us an opportunity to believe. We should resemble St. Thomas in his desire to believe, especially because many people do not wish to believe. Let us ask the Lord to help our unbelief in order to inherit the Kingdom of Heaven. For St. Paul the Apostle teaches that it is impossible to please God without faith (Heb. 11, 6).

The choir beautifully performed the Apostichas of Pascha and of St. Thomas Sunday during preparation for Holy Communion.

Following the dismissal of the Liturgy the Rector preached a short sermon in English explaining the ideas of his Russian homily. Then he distributed the Artos among the parishioners. 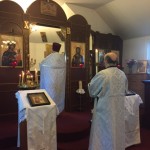 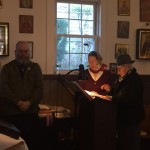 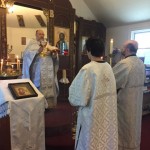 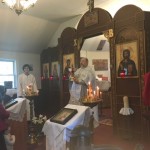 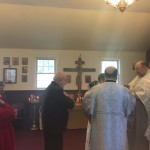 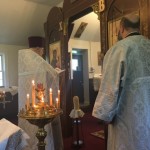 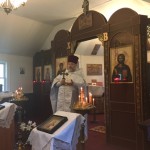 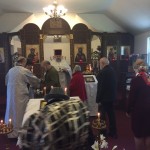