On April 8 we celebrated Palm Sunday which is the feast of the Entrance of the Lord into Jerusalem. Priest Igor Tarasov celebrated solemn Divine Liturgy at St. George’s Church. Before the Liturgy Fr. Igor blessed the pussy-willows and distributed them to the parishioners. Faithful present at the Liturgy were holding the blessed branches resembling the people of Jerusalem who greeted our Lord Jesus Christ entering the holy City.
Following the Liturgy dismissal Fr. Igor preached a homily regarding the holy day celebrated. He said that Lent is coming to the end; we finished the very time of the holy Forty-day fast period and start the Holy Week. It was not easy to keep fasting, especially because many people around us did not observe the same rules, and the whole atmosphere in the society was not telling us about Lent. “In the old days of the Russian Empire Lent was noticeable: a lenten bell was constantly rang to remind the people of that season, theaters were closed and public entertainment stopped. Even if not everyone was observing fast, everybody knew about it, and the whole society was aware of that season. Now we are on our own, especially in this country where the Church and state are separated. But that separation should not mean that faith should be separated from the society, from the people. But sometimes it is understood in such a way. And we also feel some separation within ourselves, a separation between our religious life and our worldly life. We feel some duality in our lives. On one hand we are Orthodox Christians. On the other hand, we must live in this world, and the world does not always notice who we are. A similar duality was seen in the conduct of the people of Jerusalem when Jesus entered that holy City. As today’s Gospel lesson tells us, the people of Jerusalem met Jesus with the palm and olive branches, greeted Him as their King and Messiah, shouted ‘Hosanna! Blessed is He Who comes in the name of the Lord!’ But in several days these same people condemned Him to death and shouted ‘Crucify Him!’ We have to admit that such a duality is seen in the man as a result of fall. We do good and bad things. Therefore, we should strive to avoid a duality in our lives, to avoid division in our hearts and to be good followers of Christ, subjects of His Kingdom and pledge a true allegiance to Him. If we take those branches today, let us hold them and follow our Lord in His triumph, as well as follow Him in His Passions in order to enter into His Kingdom.” 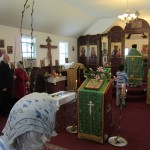 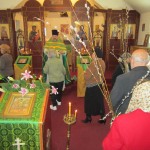