By the blessing of His Grace, Bishop John, I recently undertook a pilgrimage to Greece and to Holy Mountain of Athos. I left New York on Tuesday, May 23 and flew to Thessalonica, Greece.

Thessalonica, also known as Thessaloniki, is the second-largest city of Greece and the capital of the ancient region of Macedonia. It has a great and glorious history as one of the cultural and administrative centers of the Roman and Byzantine Empires. For us Christians it is remembered as a place where Holy Apostle Paul preached and converted a number of people. Later he wrote his two Epistles to Thessalonians. In the Christian era the city also became famous for its Saints, such as Great Martyr Demetrius, St. Gregory Palamas and other holy men and women.

On Thursday, May 25, on the feast of the Ascension of the Lord, I prayed during the Divine Liturgy at the Thessaloniki’s Metropolitan Cathedral of St. Gregory Palamas. Following the service I had an opportunity to venerate the relics of St. Gregory which are rested in the Cathedral’s chapel.

After the festal service in the Cathedral I visited other important places of worship in the city, such as the Church of Panagia Acheropoietos (of the Mother of God “not made by hands”) and the Hagia Sophia Church. These are very ancient temples in Thessalonica that preserved the old frescos and ancient style. Hagia Sophia Church has relics of St. Basil of Thessalonica which I visited and venerated.

Taking a taxi cab I could get to St. Paul’s Hill where this Holy Apostle preached to the citizens of Thessalonica in the 1st century AD. There is a small church and a monastery built there which I had also visited. That monastery is also famous for its founder, Venerable David of Thessalonica whose endeavor was to live on a tree (similarly to the Stylites who lived on the tops of the pillars).

Walking down from St. Paul’s Hill to the city I came to St. Demetrius Basilica, an ancient church dedicated to the very famous Martyr who died for Christ in this city in the 3rd century. The relics of Great Martyr Demetrius had been taken from Thessalonica by the Crusaders. They were held in Italy. However, recently the relics were returned to this city by the Italian Roman Catholic hierarchs. Now they are rested in St. Demetrius Basilica where a special chapel is built upon the reliquary. In addition, there is a source of myrrh in the Basilica’s basement. The myrrh was noted to flow a number of times from the relics of the Holy Great Martyr, thus St. Demetrius is often called the “Myrrh-streaming”. I had an opportunity to venerate the relics of St. Demetrius, as well as the myrrh source and to taste the holy water from the water fountain in the Basilica. It has to be noted that at the times when the relics of St. Demetrius were taken from Thessaloniki, the faithful venerated his “empty tomb” in another chapel attached to the Basilica. They believed that the relics were first reposed there. But even an empty tomb of the Holy Martyr was making miracles. It is still honored, so I could also enter that chapel and venerate this tomb. In addition, St. Demetrius Basilica holds relics of Martyr Anisia which are very accessible in the church.

On this same day I also visited the ancient Baptistery of St. John the Forerunner where early Christians gathered for their underground services and later people of the city were baptized. Then I came to the church dedicated to the Meeting of the Lord. It is a place of the repose of the relics of Venerable David and Theodora of Thessalonica, two ascetic persons who lived and fulfilled their endeavors in the city. We already mentioned St. David who was a Dendrite, an ascetic living on a tree. He lived in the 6th century. St. Theodora lived a monastic life in the 9th century. I had an opportunity to venerate their relics in the Holy Meeting Church.

On the next day, Friday, May 26, I left Thessalonica to visit famous Mt. Olympus. The ancient Greeks believed that this mountain was a dwelling place of their gods. In the Christian era many monasteries were founded on that mountain in order to overcome pagan cults and chase the demons out.

My journey first was to St. Ephrem’s Monastery. It is a women’s convent situated in a very beautiful countryside near Mt. Olympus. This monastery is relatively new and my tour guide told me that the nuns who came to dwell there had training in landscaping design and architecture. They made this monastery very beautiful and appealing. It is known for the holy relics: the right hand of Venerable Ephrem the Syrian and a part of the relics of Great Martyr Catherine. These relics are rested in the main monastery church. After venerating the relics of the Saints we were invited to the guest hall of the monastery. It has to be said that every Greek monastery has nice tradition of hospitality. The pilgrims are usually invited to the guest hall called the “archontariki”. There they are offered a shot of homemade grape liquor, some sweets, especially the lukum, and coffee.

Another holy place we visited on that day was St. Dionysius of Olympus Monastery. Venerable Dionysius lived in the 16th century when Greece was already conquered by the Turks. He founded a number of monasteries, including several on Mt. Olympus. Now there are two of them in the area. They are situated between the high mountains. The old monastery had been partially destroyed by the Germans during World War 2. But it still has an acting temple where we could venerate the icon of the Saint.

On the third day of my stay in Greece, on Saturday, May 27, I visited the two holy places located near Thessaloniki. In the village of Souroti there is women’s monastery dedicated to Venerable Arsenius. This place is known because Elder Paisios of Mt. Athos lived there his last years of earthly life, being in the care of the monastery nuns. Elder Paisios who died in 1994 is very respected for his spiritual guidance and ascetic life in the modern times. He was canonized in 2015. Elder Paisios’ grave is a very honored place. Usually the pilgrims make a long line to come and venerate it. On the day I came the line was not too long. It took me about 10 minutes to get to the Elder’s grave. Then I entered the monastery temple and venerated relics of Venerable Arsenius.

The next interesting holy place to visit near Thessaloniki was the monastery dedicated to Holy Great Martyr Anastasia Pharmakolytria (the Deliverer from Potions). This ancient woman Saint was born in the 2nd century and died in 304 AD. She was given a name of the “Deliverer from Potions” or “from Bonds” because her intercessions are credited with the protection of the faithful from poison and other harmful substances. She is also believed to be a protectress from any evil spells and charms. Many pilgrims purchase special rings blessed in that monastery to protect themselves from evil forces. The monastery itself was founded in the Middle Ages and the relics of St. Anastasia were transferred there from Constantinople. It is now in the jurisdiction of the Patriarch of Constantinople while most of the local Greek churches and monasteries belong to the autocephalous Church of Greece. Unfortunately, a couple of years ago the relics were stolen from the temple and still not found. However, faithful still venerate the place where the relics reposed and the two icons of the Saint. It is noticeable that the interior walls of the monastery temple are painted black as a reminder of the fire which once burned St. Anastasia Monastery. Another important treasure of St. Anastasia Monastery is a part of the relics of Holy Apostle Andrew which is rested in the main temple, and I had an opportunity to venerate it.

On Sunday, May 28 I prayed at the Divine Liturgy at St. Demetrius Basilica in Thessaloniki. The temple was filled with the parishioners and pilgrims. Following the service I had a chance to approach and venerate holy relics of the Great Thessalonica Martyr for the second time. After attending the church I had a free time and took some rest before another stage of my pilgrimage which was a 4-day visitation of Mt. Athos. 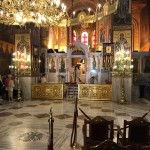 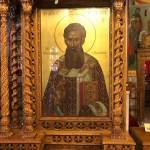 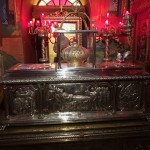 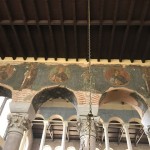 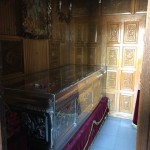 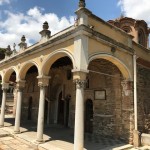 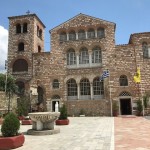 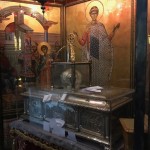 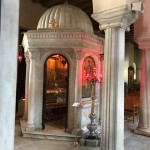 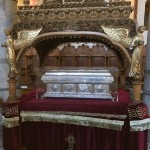 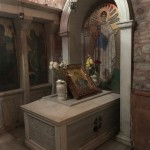 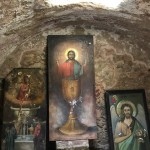 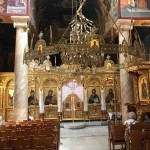 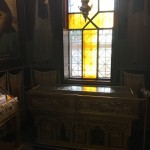 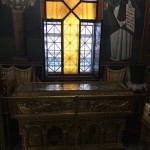 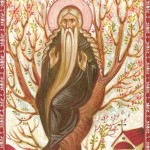 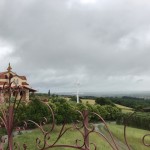 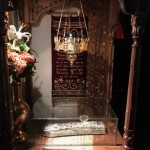 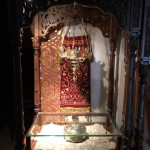 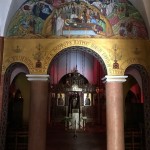 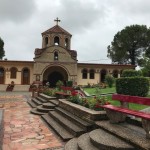 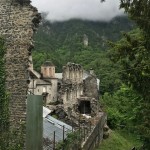 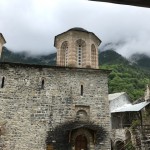 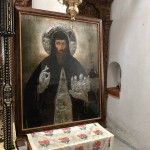 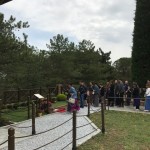 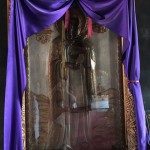 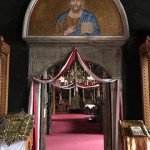 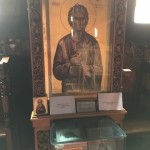 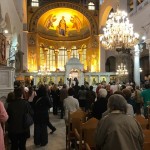