On September 10, on the 14th Sunday after Pentecost, St. George Parish held a nice celebration. In addition to the Sunday observance we celebrated feast of the Beheading of St. John the Baptist that had been transferred to Sunday. Our Rector, Archpriest Igor Tarasov served the Divine Liturgy. After the readings from the Scripture he preached the following homily in English:

“Today along with our Sunday celebration we observe feast of the Beheading of St. John the Baptist. Both Sunday Gospel lesson and the reading of the story of the Beheading of the Forerunner may give us a sad and negative impression. In our Sunday Gospel assigned for today we hear a parable of the Wedding Feast. It shows that so many people neglected the invitation of their king, and even among those who came to the banquet there were people not dressed appropriately. Our Lord finishes that parable by saying, “Many are called, but few are chosen” (Mt. 22, 14). And in the Gospel story of the execution of St. John the Baptist we hear that this just man was killed by the unjust people and there was no one to defend him.”
“Listening to such sad stories we may recall the words of the Prophet Isaiah: “The righteous perishes, and no man takes it to heart” (Is. 57, 1). St. John was beheaded to honor the request of a loose dancing girl and because of the hatred of her adulterous mother, and no one took it to heart. The birthday banquet of king Herod was not stopped, no guest became indignant and no man became frustrated that such a righteous man was murdered. And in some time after that crime, another villainy had been done, another just Man was killed – our Lord Jesus Christ. Not to honor the request of some dancing girl, but to please the angry crowd an innocent Person of Christ was crucified. And no man took it to heart. We say “no man” because a small number of the Apostles and the Most Holy Mother of God were like a drop in the ocean of the enemies of Christ.”
“These two examples of the execution of St. John the Baptist and of Christ suggest that evil is very successful and reigning in this world while good is very often defeated and humiliated. It may also be observed through the whole history of mankind. It is seen right now in many places of the world. And today’s Gospel lesson about the Wedding Feast may lead us to a conclusion that our human nature is so corrupt and ungrateful that God won’t allow most of us to enter into His Kingdom. Thus today we may tend to think negative and become filled with pessimism.”
“But let us try to think positive. The whole idea of the Kingdom of God where all of us are invited should overcome all kinds of pessimism. Our Lord is describing His eternal Kingdom in an image so understood to the people – as a wedding feast. In the times of Christ and in East weddings were celebrations of human love, and the families that made them attempted to invite as many guests as they could. So the Lord compared His Kingdom to such a feast. Everyone is welcome. It is now our own choice whether to accept that generous invitation. If we accept and do our best to get there, to enter into God’s Kingdom, to participate in His everlasting celebration of Love – we will be there. And our garment will be appropriate if we will prepare and put such garment on. So, the Lord won’t throw us out of His banquet hall into the outer darkness. It is totally up to us.” “Even if we fail to do our preparation, even if it seems difficult for us to accept God’s invitation, the Lord is always willing to help us. He provides His divine grace, He assures us that if with men it is impossible, with God everything is possible (Mt. 19, 26). And despite that only few are chosen, the Lord keeps saying, “Come to me, all you who are weary and burdened, and I will give you rest” (Mt. 11, 28). And the whole Scripture is full of very optimistic and positive assurances of God’s love and willingness to save everyone. But on the other hand, of course, God won’t save us without our desire to be just. The book of Revelation says, “He who is unjust, let him be unjust still; he who is filthy, let him be filthy still; he who is righteous, let him be righteousstill; he who is holy, let him be holy still “ (Rev. 22, 11). God gives us a choice. If we are unjust or filthy, He will judge us; if we are righteous and holy He will bless us.”
“Sometimes God allows unjust to be punished even before His judgment, even in this life. The punishment of Herod, Herodias and her foolish daughter was terrible. They suffered a very tragic death. But as regards St John who called and still calls to repentance – his name lives on forever.”
“Therefore, dear brothers and sisters, despite the sadness of today’s Gospel lessons, let us remember that God’s justice will always prevail. Let us also remember that we are all invited to share in the joy of our Lord in His eternal Kingdom. An invitation is sent and the doors of the banquet hall are wide open. The Wedding Feast is waiting for us. It is now up to us whether we will accept that invitation, do our best to come and be dressed appropriately. If not, we will join king Herod, Herodias and her foolish daughter the dancer. We will join those who condemned Christ. But if we will do our best we will join the holy ones, we will be among the Saints such as John the Baptist, the Most Holy Mother of God and our Lord Jesus Christ!”

Since in the beginning of September the Russian Church holds a special day of prayer for the preservation of God’s creation, during the Litany of fervent supplication the Rector offered special petitions for that cause.

The choir prayerfully performed hymns dedicated to the Beheading of St. John the Baptist, as well as in honor of the Saints commemorated on this day (Ven. Moses the Black and Ven. Job of Pochaev).

Following the Liturgy dismissal the Rector preached a short sermon in Russian explaining the main ideas of his English homily.
The Rector also congratulated our parishioner Moses Dunetz on the occasion of his nameday, the memory of Ven. Moses the Black. Traditional Polychronion (“Mnogaia leta!) had been sung.
After that the Rector offered a prayer for the schoolchildren who begin their new school year and performed a blessing of the young child Elena Malyshev who is starting her school year by entering the preK group. 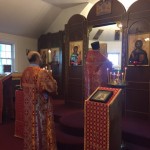 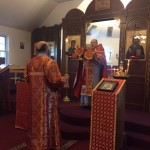 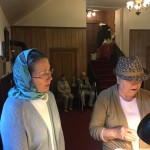 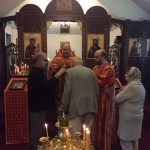 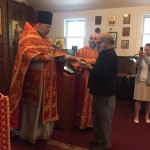 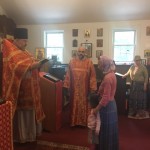 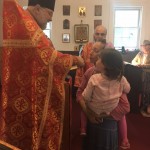 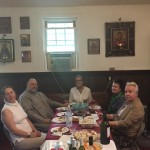