On February 4, on the Sunday of the Prodigal Son, as well as the feast of the New Martyrs and Confessors of the Russian Church, our parish family held a beautiful celebration. The Rector of St. George Church, Archpriest Igor Tarasov served the Divine Liturgy in our temple. Following the Scripture readings he delivered a homily in Russian.

In his homily the Rector compared the parable about Prodigal Son to the sad situation in which the society of former Russian Empire found itself after Russian Revolution. Like the Prodigal Son it went away from the Father’s house which was the traditional living, to a far country of godless existence and erroneous conduct. It began to build a new Tower of Babel but very soon it felt hunger and need. But not every member of that society fell into that delusion. Many faithful sons and daughters of the Orthodox Church wished to remain with their traditional belief and in the Holy Faith. They were persecuted and murdered by godless authorities. Therefore, we now have so many Martyrs and Confessors in the Russian Church. Thank God, they did not betray their faith and now they are our intercessors in heaven. Fortunately, in the recent decades the society of the former Soviet Union understood its error and began to return to a normal living. However, not all wish to follow the example of the Prodigal Son who returned to the Father’s house. Some did repent, converted to the Orthodox faith but still many did not. And the society in Russia as a whole did not repent for the crimes of the past. There are still monuments to the leaders of godless regime and the streets and towns are still bearing names of the murderers and persecutors of the Christians.
What should be done in this situation? Christianity is a religion of seeming contradictions. We are being saved only as a community, in the Church. But, on the other hand, salvation is a totally personal affair. We wish that the society may be saved as a whole, but we realize that what is really important is that each one would save his or her soul. Therefore, we need to save our own souls. We ourselves need to repent and to follow the example of the Prodigal Son. And then we need to pray to the New Martyrs and Confessors of the Russian Church that as many as possible could be saved and find their way back to the Father’s house.

During the time of the preparation for the Holy Communion the choir prayerfully performed the hymns from the Lenten Triodion which begin to be sung on this Sunday, starting with the words “The door of repentance open to me, o Giver of life…”. After those hymns the singers also sung the hymns dedicated to the New Martyrs and Confessors of Rus’.

After the Liturgy dismissal the Rector preached a brief sermon in English stressing the main points of his Russian homily. He also congratulated the altar server Anton Malyshev on the occasion of his past nameday and handed to him a Theotokian prosphora. Traditional Polychronion (“Mnogaia leta!”) was proclaimed.

Following the Liturgy the Rector performed a memorial service (Litia) to commemorate all the deceased who suffered during the time of godless persecutions. 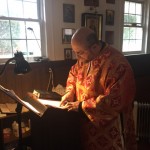 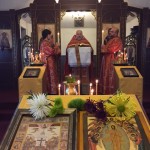 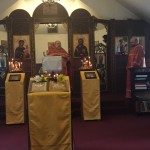 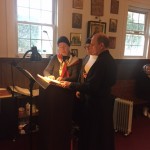 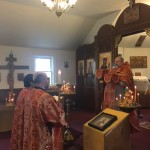 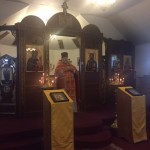 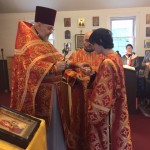 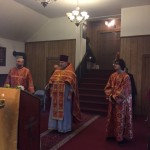