On February 25 the Church celebrated the First Sunday of Lent, also known as Sunday of Orthodoxy. On that occasion we had a beautiful celebration at St. George Church. Our Rector, Archpriest Igor Tarasov served the Divine Liturgy of St. Basil. After the Gospel lesson he preached the following homily in English:

“Dear brothers and sisters in Christ! After the first week of Lent we came to the celebration of the First Lenten Sunday, also known as feast of the Triumph of Orthodoxy. The Gospel reading that we heard today is about finding Christ. It tells us how the first Disciples met Jesus and came to believe that He is the Messiah. Thus today’s Gospel is about finding God.”
“One of the first Apostles, Philip found another future Disciple, Nathanael and said to him, “We have found Him of whom Moses in the law, and also the prophets, wrote – Jesus of Nazareth, the son of Joseph” (Jn. 1, 45). Thus Philip and Nathanael (commonly known as Bartholomew) , as well as other Apostles found the Messiah, the Christ. They have found the true Son of God; they have found God.”
“Dear brothers and sisters! This is the main and the most important goal of human life – to find God, to find our Creator and our true Father. Recently we celebrated feast of the Meeting of the Lord and reflected upon that profoundly spiritual and meaningful event when righteous elder Simeon finally met the Christ and could enter into eternal communion with God. Today we reflect upon the holy Apostles, namely Nathanael and Philip who met Jesus and recognized Him as the Christ. That recognition, that encounter with the Messiah initiated a new life for them, a life which also led them to eternal communion with the Most High in His Kingdom. Therefore, every human being has to strife to encounter God and be admitted into His everlasting Kingdom.”
“Unfortunately, many people live and never truly come to know their true God and Creator. These are the men and women who do not accept Christ, who do not belong to Christian faith or those who reject the very existence of God. But even for many those who formally accept Jesus Christ and embrace Christianity, the true encounter with God may never take place. It happens either because of their spiritual inability due to sin or because of their incorrect understanding of God. Due to sin many of us are not able of meeting God in our lives. But this can be changed by true and sincere repentance, by a desire to convert. Then we, sinful people, may become able to encounter with the Lord. But it is more difficult for those Christians who do not hold the right belief. Only holy Orthodox Church can give us a chance to meet the true Christ. Only being an Orthodox Christian grants us an opportunity to encounter God because being Orthodox we can learn the correct faith and correct understanding of the truths about God.”
“This is why, dear brothers and sisters, it is important to embrace not only Christianity, but the true Christian faith which is preserved in the holy Orthodox Church. Despite our sinful state, it may give us a chance to approach God, to find Him and to follow Him into eternity.”
“Today let us also reflect upon another important question: is it enough to find God, to meet Him, to become worthy of His eternal Kingdom? Righteous Simeon, we said, met the Child Jesus and could die peacefully. For him it was quite enough. Holy Apostles encountered Jesus and stayed with Him for about 3 years. Then He died on the cross, He rose from the dead, He stayed with them for another 40 days and then He ascended into the heaven. Was that enough? No. They received the Holy Spirit. They began to preach to the nations; they converted a lot of people to Christ. Many of them died for Christ in several years, but some lived for about 20 years and kept preaching and doing their apostolic work. They did after 3 years of knowing Christ. We should remember that after His Ascension into heaven Christ did not really leave the Apostles. He told them, “I am with you always, to the very end of the age” (Mt. 28, 20). So, He was with them but they had to do their work.”
“Therefore, dear brothers and sisters, after coming to know God, after the encounter with Him, we need to do our work. Unless we die as St. Simeon, we need to act. We have to imitate Holy Apostles and other Saints who acted upon their salvation and salvation of others. How long do we know Christ? The answer to that question may slightly vary. We are all supposed to know Him after our Baptism. But since for many of us it occurred at the early age, many of us truly met Christ later. It could be 40, 30, 20 years ago depending on each person’s age and situation. Let us then ask ourselves, “What have we done after meeting Him?” Did we act? Did we preach like the Apostles? Did we undertake the endeavors of faith and piety like the heroes mentioned in today’s Epistle lesson? Were we ready to sacrifice our lives for Christ like Holy Martyrs? Did we fasted and prayed like Venerable ascetic Fathers? Did we attempt to be an example to others? The Lord is waiting for our actions, our cooperation with Him in this world.”
“Dear brothers and sisters! Celebrating this Sunday of Orthodoxy, let us be grateful for the gift of the true faith and for the joy of knowing the Christ, the Son of the Living God. Let us also continuously act upon our salvation and service to others in order to achieve God’s divine glory!”

The choir prayerfully performed penitential hymns and hymns of the Sunday of Orthodoxy during preparation for Holy Communion.

After the Liturgy dismissal the Rector performed prayer service of the Sunday of Orthodoxy solemnly declaring the Orthodox faith and proclaiming eternal memory to the champions of that faith and the polychronion to the Church hierarchy and Orthodox Christians.

At the conclusion of the service the Rector preached a short sermon in Russian stressing the main thoughts of his English homily and congratulated the parishioners on the completion of the first week of Lent. 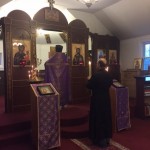 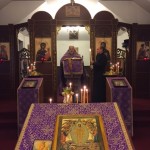 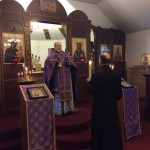 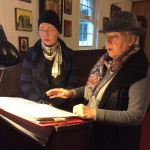 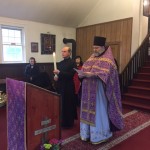 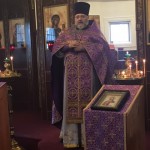