On April 6, on the Holy and Great Friday we had two special services in our parish temple. This day is the most sorrowful day in Christian calendar. On Holy Friday we commemorate crucifixion of our Lord Jesus Christ, His death on the Cross, as well as His burial. St. George Church’s Rector, Archpriest Igor Tarasov served Vespers with the procession of the Shroud at 4:00 PM.

Following the Scripture readings concluded with the Gospel lesson about the Holy Passions of Christ the Rector preached a sermon in Russian. He pointed out that it is hard to comprehend the concept that God died for us on the Cross. How can God die? However, sometimes in our life we think that all which is good has died. The recent tragedy in Kemerovo, Russia could be a sad example of that. How can the parents of those children who died in fire in Kemerovo accept that? But today we will carry the Shroud because God the Father lost His Son, Jesus Christ. Even if we begin to reason that God should not have sorrow, we may recall the Most Holy Mother of God who was human and who definitely felt a great sorrow for the death of Her Son. Thus if the Son of God Himself died a cruel death and was laid in the tomb, we should not despair when we see death, a death even very cruel and senseless. But we should understand that the Son of God died because of our cruelty, because we lack true love in our hearts. Our vanity, our pride, our impurity, our senselessness have laid Jesus today in the tomb. And if we won’t acknowledge that, it will be difficult for us to acquire salvation. The mystery of the love of Christ is such that He took upon Himself all our sins and transgressions and had to die for us. In the conclusion of his sermon, the Rector called the faithful to come and worship the Lord’s Tomb being aware of our unworthiness and asking for forgiveness, worshiping with the eternal hope because we know that Christ is not just a man who died but the true God who conquered death by death.

At the end of this service holy Shroud had been solemnly carried out from the altar to the middle of the church and placed there for veneration.

At 7:00 PM the Rector celebrated Matins on the Lord’s Tomb. Most of this service was performed before the Shroud placed in the middle of the church. After the Great Doxologion the Rector, altar servers and parishioners performed the procession around the church. The priest carried the holy Shroud resembling burial of the Lord. 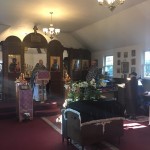 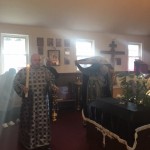 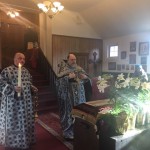 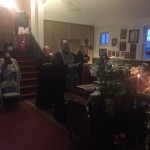 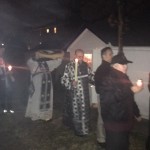 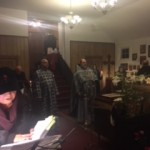