On August 12, on the 11th Sunday after Pentecost, Rector of St. George Church, Archpriest Igor Tarasov  headed the Divine Liturgy at our parish temple. After the Gospel lesson he preached the following homily in English:

“Our Gospel lesson assigned for today tells us a parable about a merciful king and an unmerciful lender (Mt. 18, 23-35). This story is very instructive: it shows how the people can be unkind, wicked, unforgiving and forgetful. On the other hand, it shows that God (who is pictured in the story as a king) is very kind and forgiving.”
“When we come to the church, which prayer do we hear the most? It is an exclamation “Lord, have mercy!” During our services the singers in the choir constantly ask God to have mercy upon us. We ourselves should join the choir in that petition and ask the Lord to be merciful. We should realize that we do need divine mercy because we do not do what we are supposed to do. We do not keep the Commandments, we do not have a strong faith, we do not feel proper love in our hearts, so we feel that we are not worthy of God’s blessings. This is why we need the Lord’s mercy.”
“What is mercy? It is something we do not deserve. It is not rewarding you according to your deeds, but it is a forgiveness of your errors or misdeeds. It is when you are supposed to pay for your mistakes, but you are given a chance not to. It is when you should be punished for your crime, you are pardoned. That happened in today’s Gospel story: a servant owed the king a lot of money and was not able to pay the debt. The king had a right and the power to punish that man: to sell him and his family members to slavery. But since that man was begging the king to have patience with him, the king forgave his debt – the king showed mercy, he showed compassion.”
“In the same way, when we ask God to have mercy upon us, we do not ask for something we deserve, but for something we don’t. If we are honest with ourselves, we should realize that our sins do not make us worthy of God’s kindness and His grace. Of course, we may also think that we are generally “good people” and deserve God’s blessing, but that kind of thinking is wrong. Even if we are good people (and I believe that most of us are), we are also sinful people. Thus we really deserve to be punished for our sins. Again, if we are honest, we see that we are not worthy of God’s grace. Thus, being aware of our unworthiness, we really understand the need to ask God’s forgiveness and His mercy. And even if we forget doing this all the time, the Church does it for us. This short but very fervent prayer – “Lord, have mercy!” is repeated in the holy temples many and many times. And according to that prayer we, as God’s servants, do receive a lot of mercy and clemency from the Lord, our Heavenly King.”
“But today’s Gospel lesson is also telling us that there is a condition under which the Lord will show His mercy. This one condition is that we will also forgive other people their debts and faults. The parable is telling that the king found out that the servant, whom he forgave that huge debt, was himself unmerciful to his fellow servant and put that poor man to prison to pay his debt in full. Upon learning that the king got angry, and delivered him to the torturers until he should pay all that was due to him (Mt. 18, 28-34). Our Lord Jesus Christ concludes the parable by saying, “So My heavenly Father also will do to you if each of you, from his heart, does not forgive his brother his trespasses” (Mt. 18, 35). Thus, dear brothers and sisters, the rule of receiving the Lord’s mercy is that we are also going to be merciful towards others. And, if we recall, this rule is stated in another very important Christian prayer, in the Lord’s Prayer. We say, “And forgive us our debts, as we forgive our debtors”, or in another English version of that prayer we say “and forgive us our trespasses, as we forgive those who trespass against us”. Thus we ourselves ask the Lord our Father to adhere to that rule with us; we ask Him to forgive us only if we forgive those who trespass against us.”
“Dear brothers and sisters! Let us remember that rule of our spiritual life: we will be forgiven the same way as we forgive others. Let us remember about that and let us recall today’s Gospel parable when we are blinded by anger and when our heart is full of evil against somebody. Let us not say or think, “I will never forgive you for what you have done!” Because if we say it and mean it, what the Lord will say to us at the Last Judgment? He will not forgive our faults and He will throw us to the tortures of hell, so we pay for our sins! Of course, we don’t wish this to happen! Then let us ask the Lord to enlighten us by His parable and His saving teaching, so we may become forgiving and not keeping grudges, so we may be merciful to each other, so our Heavenly Father will be merciful towards us.”

After the dismissal of the Liturgy the Rector preached a short sermon in Russian to stress main thoughts of his English homily. He also announced that next week the Orthodox Christians begin the Dormition Fast.

Following the sermon and announcements the Rector performed a customary blessing of the new honey. At the end of the services he also congratulated the Malyshew family on the occasion of their little daughter Elena’s 4th birthday celebrated last week. Traditional Polychronion (“Mnogaia leta!”) was sung.

Our celebration continued at the coffee hour where the Rector and parishioners enjoyed coffee, tea and sweets, as well as a nice conversation. A birthday cake was presented to little Elena. 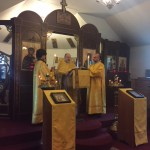 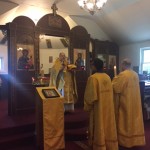 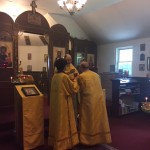 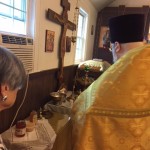 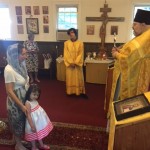 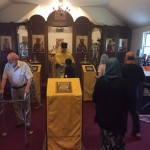