His Beatitude, Metropolitan Tikhon welcomed Bishop Matthew and Fr. Igor at the Chancery and gave them a guided tour to St. Sergius of Radonezh Chapel. The OCA Chancery staff at this meeting was represented by Protopresbyter Leonid Kishkovsky, Director of External Affairs of the OCA; Archpriest Eric Tosi, Secretary of the Chancery; and Archdeacon Joseph Matusiak, Secretary to the Primate.

Bishop Matthew expressed his gratitude for the opportunity to receive His Beatitude’s blessing as he begins his ministry in North America.  In turn, Metropolitan Tikhon stated that he anticipates a fruitful relationship with His Grace, recalling the close relationship the OCA has always enjoyed with former Patriarchal Administrators over the years, and most recently with His Grace, Bishop John of Naro-Fominsk.

During lunch Metropolitan Tikhon and Bishop Matthew discussed a wide range of topics, including the status of the Patriarchal Parishes in the US, the life of the Orthodox Church in Great Britain, and missionary prospects in North America and Western Europe.  Metropolitan Tikhon shared the OCA’s plans to celebrate the 225th Anniversary in 2019 of the arrival of the first Russian Orthodox missionaries in Kodiak, AK and the 50th Anniversaries in 2020 marking the Granting of Autocephaly and the Canonization of Saint Herman of Alaska.

As a remembrance of their meeting, Metropolitan Tikhon presented a panagia to Bishop Matthew, as well as a new English edition of the Archieratikon. His Grace in turn presented the Metropolitan the commemorative plate marking the 300th Anniversary of Orthodox Christianity in the British Isles. Fr. Igor was presented with a new English edition of the Service book, as well as an icon of St. Herman of Alaska. 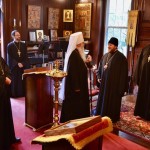 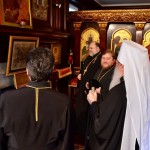 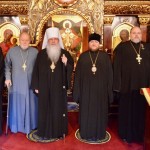 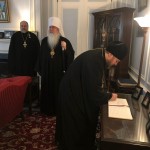