On Wednesday, December 19, commemoration of St. Nicholas the Wonderworker, Divine Liturgy for the Patronal feast of the Patriarchal Cathedral in New York City was celebrated by the Primate of the Orthodox Church in America, His Beatitude Metropolitan Tikhon of all America and Canada. His Beatitude was co-served by the interim Administrator of the Patriarchal Parishes in the USA, Bishop Matthew of Sourozh.

A number of parishioners from St. George attended that beautiful celebration, including our Warden and Choir Director, Olga Roussanow and our Sacristan, Andrew Malyshev.

During the Liturgy, Bishop Matthew ordained new clerics of the Patriarchal Parishes in the USA: Deacon Nicholas DeGraaff to the Holy Priesthood, and Subdeacon Michael Sidorechev (cleric of St. Nicholas Church in Chester) to the Holy Diaconate.

Following the Ambo prayer, a rite of glorification was served before the icon of the Patron Saint of the Cathedral.

Following the dismissal of the Liturgy Bishop Matthew greeted Metropolitan Tikhon, thanking him for his prayers during the Liturgy. In commemoration of his visit, Bishop Matthew presented the Primate of the Orthodox Church in America with a jade prayer rope.

A bountiful lenten luncheon was served in the Cathedral refectory where interaction continued. Later, the two hierarchs met discussing various points of cooperation between the Orthodox Church in America and the Patriarchal Parishes in the USA, as well as exchanging assessments on the situation in the Ukrainian Orthodox Church. 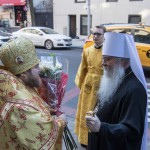 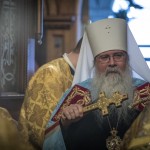 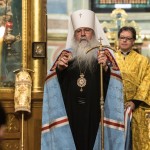 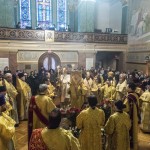 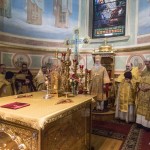 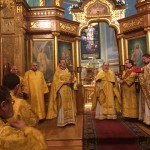 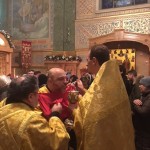 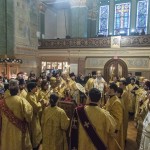 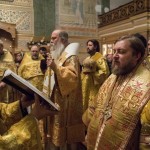 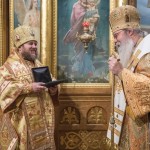 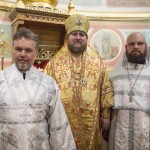