On January 13, on the Sunday after the Nativity, the Rector of St. George Church, Archpriest Igor Tarasov served the Divine Liturgy in our parish temple. Following the Gospel lesson he preached the following homily in English:

“On Sunday following the feast of the Nativity of Christ we honor the so called Fathers of God, righteous Joseph the Spouse, king David and Apostle James, brother of the Lord. They were relatives of our Lord Jesus Christ by flesh, as well as the representatives of the family to which Christ belonged as a Man. The Lord came from the tribe of Judah, from the family of David, the ancient king and Prophet of the Old Testament time. According to the Prophets, the Messiah had to come from that tribe and from David. Righteous Joseph, the Spouse of the Blessed Virgin Mary, also came from that family. He was the guardian of Jesus and was considered His father in the eyes of the people. And Holy Apostle James was one of the sons of Joseph from the first marriage, thus he was a stepbrother of Christ, so we call him the Lord’s brother. Those three Saints from the human family of Christ are honored today to make it clear that the Son of God truly became Man and had His human relatives.”
“Today we should especially mark the role of St. Joseph the Spouse in the early life of our Lord Jesus Christ. In our Orthodox tradition we somehow do not pay much attention to that Saint. Today is the only day in our calendar when we commemorate him. Catholics do really honor him much more. If a Roman Catholic is asked whom he honors the most, he would say, “Jesus, Marry and then Joseph”. If a Russian Orthodox is asked, he would probably name St. Nicholas after the Lord Jesus and His Blessed Mother. This is the way we traditionally honor the Saints. But if we think about it, St. Joseph was very important person in history of our salvation and in the very life of our Savior.”
“Today the Gospel tells us how righteous Joseph was taking care of the Holy Family, how he protected the Child Jesus. He received a revelation in a dream from the Angel and he took the Child Jesus and His Mother and fled with them to Egypt. He stayed there until the danger had passed, then he brought them back to the land of Israel. The reason for all these wanderings was that king Herod became disturbed by the birth of Christ and he was afraid that a new king of the Jews was born, and that He would claim his throne. First Herod tried to find out from the Wise Men where that King was born and staying, but the Wise Men received the revelation and did not return to Herod and did not reveal him the place of Christ birth. Then, as the Gospel says, Herod sent his warriors to put to death all the male children in Bethlehem who were under two years of age. But at that time St. Joseph had already left Bethlehem along with the Holy Family and Christ had been saved.”
“A strange thing happened: the Savior of the world was saved by St. Joseph. The Savior of mankind was saved by a man. Therefore, we should remember the endeavor of righteous Joseph the Spouse and honor him, despite the fact that he has no separate feast in our calendar.”
“In addition, dear brothers and sisters, we should think today about the cause of salvation. How does it occur? What does it mean that Christ saves us?”
“Today we heard the Gospel story about the first years of the life of Christ. It gives us an answer to those questions. Let us see: God was born into the world; everything is in the power of God.  What happens next? Herod being full of anger desires to out Jesus Christ to death. What happens then? An Angel appears to Joseph in a dream and tells him to take the Child and His Mother and to flee to Egypt. Thus, in fact, as we already said, Joseph saves Christ. How come? Christ came to save everyone but here Joseph takes Mary and Her Child and escapes saving them?!”
“Here is, dear brothers and sisters, an answer to a question: “How our salvation occurs?” It occurs when the will of God and the will of man are working together. Joseph listened to the Angel and made great efforts, undertook a long journey, performed a great labor. In the same way our own salvation is our common labor with the Lord. The Lord open for us the doors of salvation, the Lord shows us the way of salvation. But we have to fulfill that task – to enter those doors or to walk that way of salvation. God cannot force us to do that; God cannot save a man without the man’s will. Our human will has to coincide with the will of God.”
“In these bright and holy days of Christmas when we celebrate the coming of our Savior into the world, let us honor holy relatives of God, especially the most worthy guardian of the Holy Family, righteous Joseph the Spouse. Let us also fervently pray the Savior who was born for us that we may have the force to walk the path of salvation. Let us fervently learn the God’s Commandments, let us live under the protection of the Holy Church and let us walk on the way of salvation to the life everlasting.”

The choir prayerfully performed the hymns of the Nativity during preparation for Holy Communion.

After the dismissal of the Liturgy the Rector and the altar server performed the glorification of the Nativity before the festal icon because that day was the final day of that feast’s celebration.

Following the glorification the Rector preached a short sermon in Russian addressing the main thoughts of his English homily. 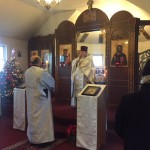 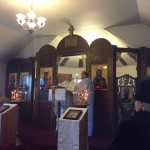 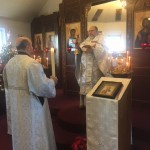 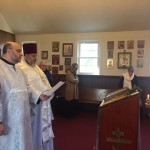