On January 19th Orthodox Church celebrates great feast of the Theophany, or Baptism of the Lord. Our parish had a nice celebration of that holy day headed by our Rector, Archpriest Igor Tarasov. He served the Divine Liturgy at St. George Church. Following the Gospel lesson the Rector preached a homily in Russian.

In his homily the Rector preached about the great and ineffable mystery of the Theophany which consists of God appearing to mankind as the Son of Man and becoming close to us. Thirty years after His birth the Son of God finally revealed Himself at the Jordan River when He came there to ask a Baptism from St. John. Our Lord Jesus Christ had no sin but He did not disdain to come to Jordan where the sinners were baptized as they repented. He did not consider a humiliation to stay along with those sinful people because God loved the world and sent His Son to redeem it. Thus the mystery of the Theophany is in God’s love towards mankind and towards each one of us.

The choir prayerfully performed hymns of the feast during preparation for Holy Communion.

Following the Liturgy dismissal the Rector and the altar servers came before the icon stand and performed the rite of glorification singing the troparion, kontakion and magnification of the Theophany. Then Fr. Igor congratulated parishioners on the occasion of the great holy day. 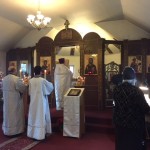 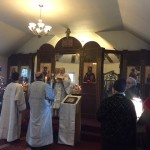 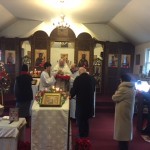 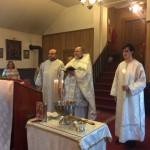 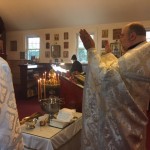 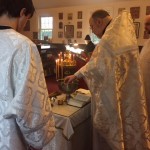 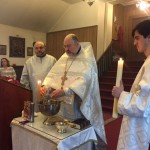 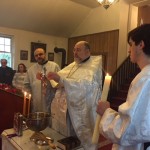 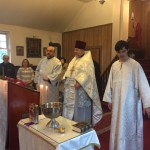