On May 5, on the Sunday of Antipascha, or St. Thomas Sunday, we had a nice celebration at St. George Church. On this day we also observed our Patronal feast of Holy Great Victorious Martyr George transferred to Sunday from Monday, May 6.
Unfortunately, this year we had no guests for the Patron Saint’s celebration. Divine Liturgy at our parish temple was celebrated by our Rector, Archpriest Igor Tarasov with the most of our parishioners attending.

Following the lessons from the Holy Gospel the Rector preached a homily in Russian. He stressed that on Sunday after Pascha called the Antipascha, we need to renew our Paschal spirit of joyful celebration and spiritual uplifting. During the Bright week we got used to the Resurrection of Christ and could have already contaminated our souls with some sins. Now the Church gives us an opportunity to renew the right spirit of Pascha. A very important meaning of our feast is that Christ by His death and Resurrection had conquered the evil and hell. Many ancient icons of the Resurrection picture Him trampling the broken gates of hell and stretching His hands to Adam and Eve, leading them out of Hades. That is the meaning of Pascha: our Lord liberated human kind from hell and from death. Death begins with sin. We still die because we still commit sins but Jesus gives us a great opportunity to repent and to be with Him in eternal life.
Our Patron Saint, Holy Great Martyr George also called the Conqueror because he conquered evil in his heart and chose death for Christ rather than a sinful life of idolatry. He is often pictured killing a dragon. There is a story about that in his life. However, without doubting the truthfulness of that story, we need to understand that imaging of St. George as symbolic because he really killed the evil one in his life, destroyed the spirit of evil by his great endeavors of holiness.
In the conclusion of his homily, Fr. Igor called the faithful to pray the Risen Lord that He may renew in us the spirit of true celebration of Pascha. He also called to pray to St. George to intercede for us and to strengthen our spiritual efforts.

The choir beautifully performed Paschal hymns, hymns of Antipascha and in honor of St. George during preparation for Holy Communion.

After the Ambo prayer the Rector proclaimed a prayer for the distribution of Artos.

Following the dismissal of the Liturgy the Rector and altar servers performed the rite of glorification before the icon of St. George singing the troparion, kontakion and magnification of that Saint. The Rector also proclaimed a special prayer to St. George.

After that the Rector preached a short sermon in English stressing the ideas of his Russian homily. He also congratulated Vitaliy Malyshev on the iccasion of his name day, the memory of Venerable Vitalius. Traditional Polychronion (“Mnogaia leta!”) was proclaimed. Then the Artos had been distributed among the faithful.

Our celebration continued at the luncheon prepared by our ladies where the Rector and parishioners enjoyed delicious meals and a nice company. 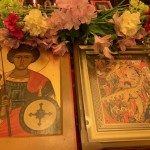 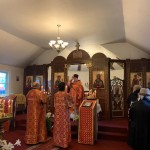 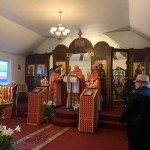 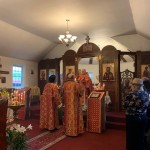 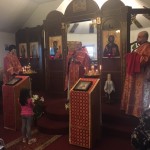 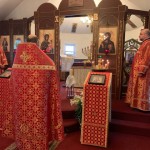 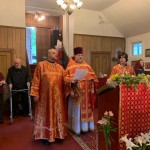 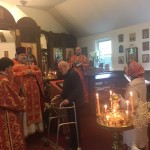 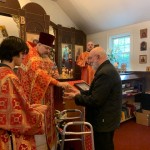 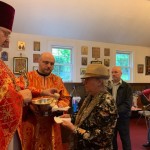