On May 12, on the Sunday of the Holy Myrrh-bearing Women, we had a beautiful service at St. George Church. Our Rector, Archpriest Igor Tarasov celebrated the Divine Liturgy. Following the reading from the Holy Gospel he preached the following homily in English:

“On the Third Sunday of Pascha we honor Holy Myrrh-bearing Women who were also the Disciples of Christ, along with Holy Apostles. This year today’s Sunday coincides with Mother’s Day, so it makes such a day a double celebration, a special feast honoring our Orthodox women.”
“When our Lord Jesus Christ was condemned to death, when He was crucified on the cross, no men followed Him and were present at Calvary. All His male Disciples, except John the Theologian, were scattered and afraid. However, His female followers remained faithful to Him and stayed with the Lord when He died. Of course, first of all, among them was His Blessed Mother, the Most Holy Theotokos. But there were other women who did not leave Christ at that horrific time of His passions and death.”
“It is common to consider women to be weaker and more fearful than men. However, this example from the life of our Lord proves that this stereotype can be wrong. Yes, women may be more fearful and weak, especially physically, but it all depends on their motivation and inspiration. Holy Myrrh-bearing Women were motivated by great love towards their Teacher and Lord. And they were inspired by great faith in Christ, the true God. Therefore, they disregarded the fear and their own weakness and followed Jesus until His death. They also disregarded the fear and weakness after His death but decided to come to His tomb to anoint His body with the spices. Great love and great faith led them. As St. John the Theologian said, “Perfect love drives out fear” (1 Jn. 4, 18). And as the Lord Himself said, “If you have faith as a mustard seed… nothing will be impossible for you” (Mt. 17, 20).”
“Love was especially instilled by God in the heart of a woman. Woman is called by the Creator to be a mother of her children and a loving partner of man. These highly important tasks require a lot of love and compassion. In many women those gifts are cherished and multiplied. Many women are good mothers, so today we may praise them for their endeavor of motherhood. But it is more precious for Christian women to have also a spiritual attitude of love and care. It is more important not only to give birth to children and to care for them but to raise them in Christian faith and piety. Thus it is not enough to give a child a gift of earthly life – it is much more important to raise a child for life eternal. Holy Myrrh-bearing Women had such gifts and made them grow. They were led not only by earthly and human love but by great spiritual love towards their Lord and Savior. Thus they had no fear to approach His tomb. So, our Orthodox women nowadays also need a motivation by great love towards God and an inspiration by great faith in the Lord Jesus Christ.”
“The history of the last century proved that our Orthodox women were worthy to be called the followers of the Holy Myrrh-bearers. During the godless persecutions of Christian faith many women kept their faith and love towards God. In the old country, under the Communist power, mostly women went to the temples, attended the church services while many men did not approach the church. Mostly women kept pious traditions, remembered the holy days and fasts. Those women – very often secretly – baptized  their children and grandchildren and later brought them to the church. Thanks to those women many young people found their faith in Christ in those years. What was driving those women? Their firm faith and their great love. In those seemingly faithless times they showed an example of faith. And they were radiant by love. Despite the slanderous imaging of religious people as mean and cruel fanatics, they were shining with love and compassion. They usually did not condemn or chastise the godless people but felt pity and prayed for them. We may note how different is that Christian religious attitude from the cruel and intolerant fanaticism of some other religions, for instance of the Islamic radicals. Therefore, true Orthodox can never become terrorists or other extreme fighters. Our Orthodox Christian people, especially women, are filled with real love and driven by true faith, not by hatred and malice.”
“Dear brothers and sisters, looking at the Holy Myrrh-bearing Women, let us cherish our faith and love towards God and other people. Let us pray the Risen Lord that He may bless our Orthodox women and mothers by the gift of true faith and great spiritual love. Let us pray to the Most Holy Theotokos that She may inspire our Orthodox women and mothers, so they may fulfill their God-given obligations of motherhood and caring fellowship and to continue to raise new generations of Christian people, granting their children the gift of life here and also life eternal!”

Following the dismissal of the Liturgy the Rector preached a short sermon in Russian stressing the main thoughts of his English homily. He also congratulated our ladies on the occasion of this Sunday which is the Orthodox Women’s day, as well as on the Mother’s Day which this year fell on this Sunday. Traditional Polychronion (“Mnogaia leta!”) was proclaimed. 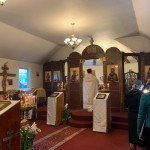 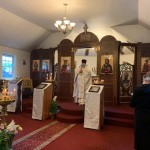 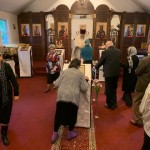