On July 7, on the 3rd Sunday after Pentecost, feast of the Nativity of St. John the Baptist, our St. George parish community had a beautiful celebration. Our Rector, Archpriest Igor Tarasov served the Divine Liturgy. After the Gospel readings he preached a homily in Russian. An English translation of that homily is as follows:

“Dear brothers and sisters in Christ! Today we celebrate the 3rd Sunday after Pentecost and great feast of the Nativity of St. John the Baptist.”
“The first Gospel lesson tells us how our Lord Jesus Christ Himself teaches us to set our priorities in life. He says to care first about our soul, about eternal and spiritual things. “Do not worry, saying, ‘What shall we eat?’ or ‘What shall we drink?’ or ‘What shall we wear?’ For after all these things the Gentiles seek. For your Heavenly Father knows that you need all these things. But seek first the Kingdom of God and His righteousness, and all these things shall be added to you” (Mt. 6, 31-33). Thus the Gospel tells us to put spiritual things first. It further teaches us to do our best and then leave the rest to God, to trust in God. Modern life, on the other hand, tells us to constantly worry, to be stressed. Such a worry only causes depression, for it excludes God and His loving Providence. On the other hand, there is nothing inevitable in the life of those who believe in Divine Providence. Even the most terrible situations can end up positively if we let God into our lives and societies. If we include God then we can exclude worry and depression.”
“The model presented in today’s Gospel had been fulfilled by those who devoted all their lives to God and spiritual endeavors. The ascetics, mostly the monks and nuns chose a difficult but spiritually rewarding path of abstinence and renunciation of the worldly things. They elected a life without worries of this world. And one of the examples of such life was Holy Forerunner and Baptist John whose Nativity we celebrate today.”
“Today’s second Gospel lesson that tells us a story of St. John the Baptist’s birth, also mentions that “the child grew and became strong in spirit, and was in the deserts till the day of his manifestation to Israel” (Lk. 1, 80). Thus St. John lived in the deserts, not in the world. He led a monastic kind of life. Therefore, his life is an example for those who follow the advices of the Lord to renounce everything and to follow Him. In the Church St. John the Baptist is called “an earthly angel” and “a heavenly man”. This is why on his icons he is shown sometimes as having wings. These are not, of course, physical wings; they are the spiritual wings of one who prays unceasingly, which is the task of all, but especially of those in the monastic life.”
“St. John, being the Forerunner of Christ is also called a star compared to Christ who is the Sun of Righteousness. Our Lord Himself called him the greatest one. Jesus said, “Assuredly, I say to you, among those born of women there has not risen one greater than John the Baptist” (Mt. 11, 11). We may wander and ask whether Jesus called St. John greater than Himself. But we have to listen carefully to the words of Christ: He says “born of women” while Jesus was born of a Virgin, not of the woman while St. John’s birth was from a woman. Although it was special and extraordinary, it was humanly natural.”
“The Holy Baptist stands at the very end of the Old Testament, but also at the very beginning of the New Testament. That is why he appears at the beginning of the Gospels. He opens up a new way and answers in a new way the old question which people have posed from ancient times. John the Baptist who never married, who remained a virgin, who prophesized, tells us that the purpose of life is to be spiritually fruitful. This is his prophetic revelation to us. Whether we are called to marriage and having children or not, we are called to bring forth spiritual fruit, to improve the world and not to worsen it, to be fruitful, and not to be barren, as his parents had been. But his parents were barren physically until the Lord blessed them with a child while all of us are called not to be barren spiritually.”
“Dear brothers and sisters! Being inspired by today’s two readings from the Holy Gospel, let us seek what are really and truly important – spiritual and eternal things. Let us trust God that He in His Divine Providence will provide for all our needs. Let us also honor and imitate Holy Forerunner and Baptist John. No matter whether we live a married or single, worldly or monastic life, we should bear a spiritual fruit and thus be blessed by the Lord through the prayers of His Holy Forerunner and Baptist John.”

The choir prayerfully performed hymns in honor of St. John the Baptist and his Nativity during preparation for Holy Communion.

Following the Liturgy dismissal the Rector preached a short sermon in English addressing the main ideas of his Russian homily. He also made some announcements regarding the following Sunday celebration. 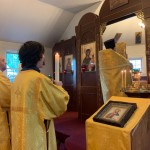 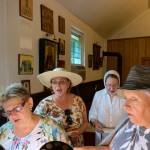 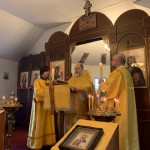 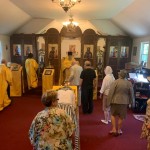