On July 28, on the 6th Sunday after Pentecost, Sunday of the Holy Fathers of the Six Ecumenical Councils, and feast of the Equal to the Apostles Prince Vladimir, we had a beautiful liturgical service at our parish temple. The Rector of St. George Church, Archpriest Igor Tarasov headed the Divine Liturgy on that triple celebration.

After the Gospel lesson the Rector preached a homily in English. He addressed the story from the first Gospel which is telling about the healing of the paralytic. Before performing a miracle of healing our Lord Jesus forgave the paralytic his sins. This occurred because the cause of all our infirmities is our sinful state. Paralysis is a terrible disease. A person is not able to move, to command over his body. However, there are many people suffering from spiritual paralysis. They cannot make a right move and choose a right thing.
Today’s memory of the Fathers of the Ecumenical Councils reminds us of the importance to have a right faith, a sound and a correct doctrine. Nowadays most people are so confused that they cannot discern what is right or wrong. They need a right guidance but cannot get it if they are not in the Orthodox Church. The Fathers of the six Councils (out of the seven) defined the dogmas and truths of our faith, so we may not be confused but see what is right to believe.
Honoring St. Vladimir and commemorating the Baptism of Rus’ also reminds us of the importance of a correct way. More than one thousand years ago there was also a hard time for St. Vladimir to decide which faith is right for him and for his people. The chronicles tell that St. Vladimir was comparing different religions held in the neighboring countries. He finally chose Orthodox Christianity. These days Blessed Onuphrius, Metropolitan of Kiev calls the politicians of Ukraine to repeat St. Vladimir’s action and to confirm his choice. However, it is very difficult. People in the world and even in the Orthodox countries are now not fully united under the guidance of the true Church. And if you look at today’s world, you may see that there is no nation which totally adheres to the true faith.
But we still have hope. Yesterday there was a great procession of the Orthodox faithful in Kiev honoring the feast of St. Vladimir and commemorating the Baptism of Rus’. According to the official Church report, around 300 thousand took part in that procession. Pious actions as such give a great hope that we won’t lose our correct way of Orthodoxy.
The Rector further pointed out that we, Orthodox believers, have to make a right choice, to have a true faith, to adhere to a sound and correct doctrine. We can no longer rely on the rulers, governments and nations. The emperors of Byzantine Empire who used to call the Ecumenical Councils to gather, or the Russian tsars who protected Orthodoxy, are no longer around. And the nations are no longer holding the same ideas. Thus it is our own responsibility to possess that holy and rich inheritance of our true faith and to preserve it for ourselves and for the next generations.
We have to be of good cheer that we are not alone in that. We have the Orthodox Church – same Church that had been chosen by St. Vladimir, same Church that was fortified by the Ecumenical Councils and their Holy Fathers. That Church helps us not be spiritually paralyzed.
In the conclusion of his homily the Rector called the faithful to preserve the faith, the fidelity to the Holy Orthodox Church, as well as our valuable heritage of St. Vladimir to be saved and spiritually whole.

The choir beautifully performed the hymns dedicated to St. Vladimir during preparation for Holy Communion.

After the Liturgy dismissal the Rector performed the rite of glorification before the icon of St. Vladimir and proclaimed a special prayer on the occasion of the commemoration of the Baptism of Rus’.

Then he preached a short sermon in Russian addressing the ideas of his English homily. He also congratulated our parishioners on the occasion of their past name day, memory of the Holy Equal to the Apostles Princess Olga: our Warden and Choir Director, Olga Roussanow and our active parishioner and singer, Olga Vnukova. Traditional Polychronion (“Mnogaia leta!”) was proclaimed.

Our celebration continued at the trapeza table where the Rector and parishioners enjoyed delicious meals and a nice company. Additional greetings and a toast was raised in honor of those who celebrated their name day. 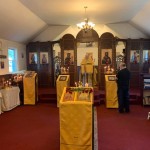 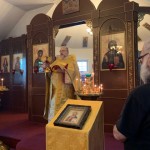 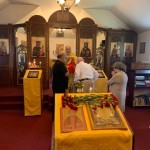 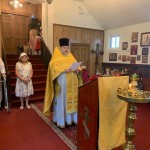 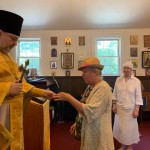 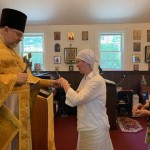