On September 1, on the 11th Sunday after Pentecost St. George Parish family had a beautiful celebration at our temple. Our Rector, Archpriest Igor Tarasov served the Divine Liturgy. After the Gospel lesson he preached a homily in Russian and English languages. An English version of that homily is as follows:

“Today’s Gospel reading tells us a parable about a merciful king and an unmerciful lender. That lender himself owed the king a lot of money, and the king forgave his debt. But that lender did not wish to forgive a very small debt to his fellow servant.”
“This lesson makes us think that all of us are in debt to God. It was not up to us to be born and it was not up to us to receive different gifts or talents we have in our life. Everyone has his own mind, his own heart and we look at the world from our own perspective. But everyone is using what the Lord has given to him. And the Lord is merciful and condescending to us. He loves us so much that He overlooks our shortcomings and forgives our sins. And He took our transgressions upon Himself.”
“Sometimes we are evil and we should be punished for our evil deeds, but the Lord takes those sins upon Himself. Sometimes we are unfair and should be rewarded accordingly, but the Lord takes that responsibility upon Himself. Sometimes we are hypocritical, lying, deceiving and should be justly reprimanded, but the Lord forgives us and allows us to live and to enjoy another day. He is never demanding that we pay for all our misdeeds. He only demands that we should be merciful to each other as He is merciful to us. He wishes that we would forgive our debtors as He forgives us our debts.”
“Instead of doing what God wishes, we do the opposite. We do not forgive. We hold grudges. We want revenge. We demand the debts to be paid. Thus we block our way to God.”
“Today we are called to pray for the preservation of God’s creation, for the environment. It is a similar situation. God gave us this earth, the whole nature He created. He entrusted that to us. He granted it free of charge. We only need to take care of the nature, to cultivate the earth, to preserve the animals and plants. What do we do? We abuse it, we demand a lot from it; we destroy the animals and plants; we devour all the resources because of our greed and wickedness. God gave us for free and we demand a gain from it. Thus we are now being punished for that by natural disasters and polluted air, water and nature. We finally realized that and the Church wishes us to offer our prayers for the nature and preservation of God’s creation.”
“We are unmerciful and we block our way to God. That is why we need to hear the Holy Gospel that tells us a parable about an unmerciful lender. That story tells us that a man owed the king a lot of money, like millions of dollars. The king forgave that huge debt. But that man met his fellow servant who owed him a small amount, like fifty dollars, and did not want to want – not to forgive – he did not want to wait! He put that poor debtor in prison. The king found out about that and punished the wicked servant.”
“Thus, dear brothers and sisters, we heard a simple and very much comprehendible parable. We receive forgiveness from God free of charge. God forgives any our transgression or filthiness if we sincerely repent. But He asks one thing: He forgives us, so we could forgive others. Therefore, if we don’t forgive, if we are unmerciful, we will have to be punished. Today the Gospel says: “And his master was angry, and delivered him to the torturers until he should pay all that was due to him” (Mt. 18, 34). In our case, what kind of torturers we will face? We will face the demons in hell that will torment and torture us for our sins. This is a horrible perspective. This is a terrible thing. But the Lord delivers us from those torments of hell if we forgive others their trespasses.”
“Dear brothers and sisters! Let us pray that the all-compassionate Lord may be merciful to us again and to grant us a spirit of mercy and forgiveness, so we could forgive others their faults. May He grant us the spirit of care for God’s creation entrusted to us, so we could preserve the nature. May He bless us with those gifts, so we may be forgiven by Him Whom glory and honor forever!”

Since on the first Sunday of September the Russian Church holds a special day of prayer for the preservation of God’s creation, during the Litany of fervent supplication the Rector offered special petitions for that cause, as well s special prayer after that Litany.

The choir was prayerfully singing the hymns of the Dormition which postfeast was still celebrated.

After the dismissal of the Liturgy the Rector offered a prayer for the schoolchildren who begin their new school year. He blessed our children and wished them a successful study and acquiring of knowledge.

Following the Liturgy the Rector performed the Baptism of an adult willing to join the Church.

After the services the Rector and parishioners enjoyed delicious meals and a nice company at the trapeza table. 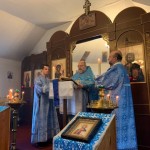 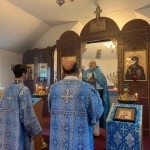 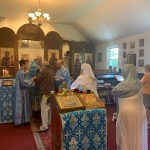 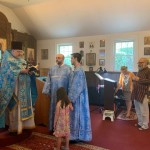 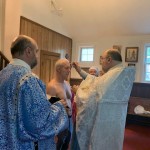 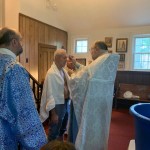 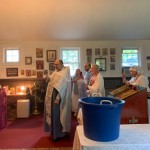 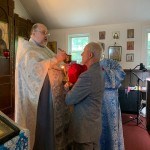