On September 15, on the 13th Sunday after Pentecost, St. George Parish held a nice celebration. In addition to the Sunday observance we celebrated feast of the Beheading of St. John the Baptist that had been transferred to that day. Our Rector, Archpriest Igor Tarasov served the Divine Liturgy. After the readings from the Scripture he preached the following homily in English:

“Dear brothers and sisters! Today’s Gospel lesson tells us a parable about vineyard and about evil vinedressers (Mt. 21, 33-42). The story was addressed to the leaders of the Jews, to those who did not accept Jesus as their Messiah and who wished to destroy Him.”
“The meaning of this parable is quite simple. The landowner is God the Father. He planted a vineyard which is Israel, the holy nation of God. The vinedressers are the leaders entrusted with the care of God’s people. According to the parable they did not wish to give the owner His share of grapes. God sent His servants to them. Those servants are the Prophets, sent by God in the times of the Old Testament to proclaim His will. The vinedressers beat and killed the servants. The Jewish leaders persecuted the Prophets and really killed some of them.”
“Today we observe Beheading of St. John the Baptist. He was one of those servants whom God was sending to His chosen people. The fate of the Holy Forerunner John was the same as of the other Prophets.”
“Since those servants of God were mistreated and not listened, God sent His onlybegotten Son. The Jewish leaders might honor the Son of God, our Lord Jesus Christ. But in their envy and impiety they murdered the Son as well. He was led out of the holy city of Jerusalem and crucified, just as the landowner’s son in the parable was cast out of the vineyard and killed.”
“Thinking of that parable and about the martyrdom of St. John the Baptist we may reflect upon the prophetic mission of the Holy Church and its servants. “A servant is not greater than his master”, says the Lord (Jn. 15, 20). Being servants of the Lord, the bishops and priests may share the same destiny as our Lord Jesus Christ who was crucified. And moreover, they can share the same destiny as the Prophets, as St. John the Baptist.”
“A Prophet is not someone who sees the future and predicts it. He is a man of God who proclaims God’s will to the people. St. John the Baptist taught the people to repent because the Messiah was coming. He also boldly said to the king that he was breaking the Commandments. Same thing happens to the good and conscientious priests if they teach the faithful appropriately. People may like it or not, but the servants of the Church are called to preach to them.”
“If people listen to the Church and its servants, they become blessed. If not, they may be condemned. In the course of history many priests were persecuted for their service to the Church and faithful. Nowadays they are often not persecuted but ignored.”
“It is our duty to listen to the servants of God and thus to listen to Christ Himself. Thus we could become good vinedressers who would render the Master the fruits in their seasons (Mt. 21, 41).”

After the dismissal of the Liturgy the Rector preached a sermon in Russian explaining the main ideas of his English homily. He also congratulated our parishioner Moses Dunetz on the occasion of his past name day. Traditional Polychronion (“Mnogaia leta!”) was proclaimed. 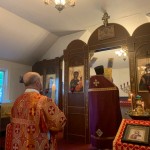 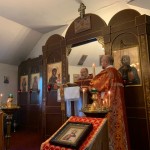 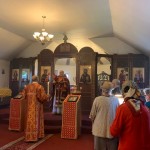 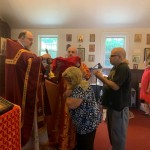 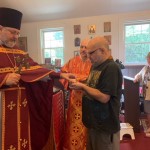 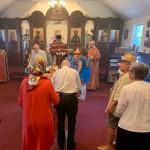