Rector of St. George Church, Chancellor of the Patriarchal Parishes in the USA, Archpriest Igor Tarasov being in Ukraine visited the famous holy place of the Orthodox Christianity, the Holy Dormition Lavra of Pochaev.
On Saturday, October 19, Fr. Igor arrived in the town of Pochaev and paid a visit to His Eminence, Archbishop Job of Shumsk, former Temporary Administrator of our Patriarchal Parishes (2009-2010). Presently Archbishop Job is the Rector of the Pochaev Theological Seminary, one of the largest theological schools in Ukraine. Fr. Igor had a meeting with His Eminence and greeted him on behalf of the parishes in America, as well as on behalf of our parish.
On Saturday evening Fr. Igor prayed and co-served at the All-night Vigil at Holy Dormition Cathedral of the Lavra. The service was headed by His Eminence, Metropolitan Vladimir, Vicar of the Pochaev Lavra. Fr. Igor had an opportunity to take a look at the beautiful temple and to venerate the miraculous Icon of Our Lady of Pochaev, as well as numerous relics of the Saints.
On Sunday, October 20, Archpriest Igor Tarasov prayed at the Divine Liturgy at St. Job and Amphilochius of Pochaev Church of the Pochaev Seminary. The Liturgy was served by His Eminence, Archbishop Job, Rector of the Seminary. 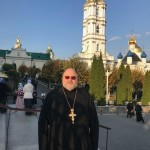 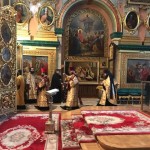 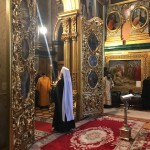 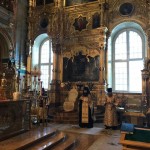 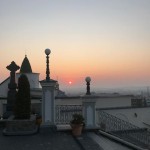 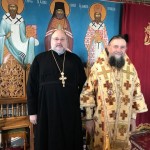 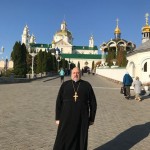