On the Third Sunday of Lent the Orthodox Church venerates the Holy Cross. This year on this day, March 22, the Church also commemorated Holy 40 Martyrs of Sebaste.  Because of the restrictions on public gatherings introduced by the New York State authorities due to the virus outbreak, St. George parish Rector, Archpriest Igor Tarasov held a service with only a few persons present.

Before the reading of the Hours the Rector solemnly transferred decorated cross from the altar to the middle of the church and placed it on the stand.

At the Divine Liturgy, during the Litany of Fervent Supplication, the Rector proclaimed the petition beseeching the Lord to spare the faithful from the outbreak of the disease. After the Litany he also offered a special prayer for the deliverance from pestilence.

Following the dismissal of the Liturgy the Rector addressed the persons present with a sermon. He stressed that the Cross of Christ that is venerated on this Sunday in the middle of Lent should comfort us in the middle of these turbulent times. The Cross is a medicine for salvation, it is a bitter and unpleasant medicine but only in such way we could be saved. And the other side of the Cross of Christ is His Resurrection. Another example to strengthen us should be the endeavor of the 40 Martyrs whom we honor today. They refused to renounce Christ and were forced to stay in a frozen lake. They endured long and torturous death but persevered in their faith. Thus we should strive for patience and perseverance in order to reach the Holy Resurrection of Christ and our own salvation.

The Rector also announced that due to the new restrictions on people’s gatherings imposed by the State of New York beginning this night, our services at St. George Church for public are canceled until further notice.

Following that the Rector and the altar server came out of the sanctuary before the stand in the middle of the church and venerated the Precious Cross. 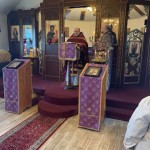 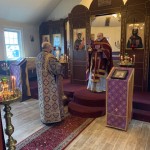 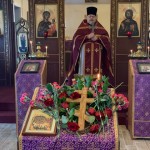 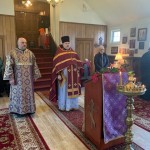