On August 19th Holy Orthodox Church celebrates feast of the Transfiguration of the Lord. On that day we had a beautiful celebration at St. George Church. Our Rector, Archpriest Igor Tarasov headed the Divine Liturgy. After the Gospel lesson he preached the following homily in English:

”Dear brothers and sisters! Today we celebrate the great feast of the Transfiguration of the Lord. Once more time in our life we are spiritually present on the Mt. Tabor. Through the eyes of faith together with the holy Apostles Peter, James and John who came to that mountain along with the Lord Jesus Christ we are seeing the glory of God during the sacred moments of that holy event. This happened not long before the holy passions and death of our Lord Jesus Christ”.
”You know that the Son of God who came down to our earth for the sake of eternal salvation of the people, appeared not in His Divine glory. If He did so, He would blind us, the sinful people, with His Divine light. But He came to us in a humble appearance, covering His divinity with the image of man. Here, on the mountain of Transfiguration, He showed Himself in the shining of His glory in which He is staying forever and in which He will be seen by those of us who by his or her life will become worthy of that”.
“On the mountain of Transfiguration along with the Lord holy Apostles saw the Prophets Moses and Elijah. Moses lived 16 centuries before the birth of Christ, and Elijah 9 centuries before. That means that Moses and Elijah aren’t dead, they are alive. They were alive on the day when the Apostles saw them, they are living today, and they will be living in the infinite ages because God in Whom we believe, as the Scripture says, “is not God of the dead but of the living” (Mt. 22, 32). In the Lord all are living. Thus the Apostles seeing the Prophets who for that moment appeared from the heavenly world, saw the confirmation of the words of the Lord Jesus Christ: “He who believes in Me has life everlasting” (Jn. 6, 47)”.
“It is then understood why holy Prophets Moses and Elijah appeared at the time of Transfiguration. We may ask then why the Lord chose only three of His disciples to follow Him to the Mt. Tabor and to sow His glory only to them. St. John of Damascus explains that saying that holy Apostle Peter was taken because he confessed the faith that Jesus is the Christ, the Son of the living God. Such a faith needed to be confirmed, and it was confirmed when Jesus showed His Divine nature. Holy Apostle James was chosen because he was the one who was to die first for Christ, to be baptized in the bath of blood shed for the Lord. And, finally, holy Apostle John the Theologian was chosen to come with the Lord to the Mt. Tabor because He was the special disciple, a virgin saint, the one who had to write in his Gospel that “in the beginning was the Word and the Word was with God, and the Word was God” (Jn. 1, 1). And He saw in the Transfiguration that the Word, our Lord Jesus Christ, was with God”.
“Yet another reason why our Lord did not show His Divine nature to all of His Apostles was because He did not wish to show it to His betrayer, to Judas. Transfiguration had to be a secret until the death and Resurrection of Christ. Now that secret is revealed to us, the Christian people. Let us then be worthy of it. Let us not allow the sin to destroy our relations with God and His trust to us. Let us be watchful because sin deprives us of the joy to see the Lord and to be with Him in eternity”.
“Therefore, we are asking today that the Lord Who transfigured upon the Mt. Tabor may enlighten our souls. We are asking that the everlasting light of His divinity may shine for us the sinners and may show us the way we should follow to pass our earthly life. May it shine to make us worthy of the dignity we are given, the dignity to be the dwellers of the heavenly Jerusalem. Let us live with the Lord and let us die with the Lord. And may our heart learn to foretaste the joy to see the Lord, to worship Him and to be with Him forever!”

Before the rite of the Holy Communion the choir prayerfully performed festal hymns of Transfiguration.

After the dismissal of the Liturgy Fr. Igor congratulated the parishioners on the occasion of the holy day and preached a short sermon in Russian addressing the ideas of his English homily. 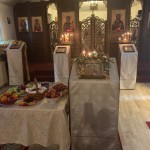 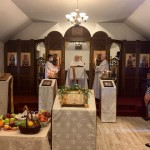 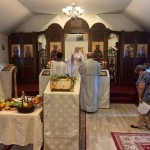 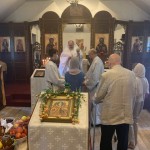 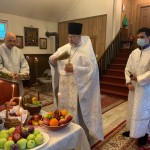 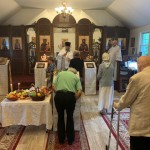