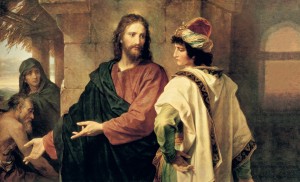 On August 30, on the 12th Sunday after Pentecost, our parish held a beautiful celebration. Rector of St. George Church, Archpriest Igor Tarasov served the Divine Liturgy in our temple. After the reading from the Holy Gospel he preached the following homily:

“Dear brothers and sisters in Christ! 12th Sunday after Pentecost has a reading from the Gospel of St. Matthew which tells us about a conversation between our Lord Jesus Christ and a young ruler. We have to say that this story appears in all three Gospels called synoptical because they mostly describe the life and ministry of Jesus Christ in a timely manner. These are the Gospels of Matthew, Mark and Luke. They all contain the same story of the young ruler, a young rich man asking Jesus what should be done to have eternal life”.
“If we wish to discuss the whole reading, we should see several points Jesus is making. First, He says that in order to enter into everlasting life one has to keep the Commandments. Commandments are the same for us, Christians of the 21st century, as they were for the young ruler and all the Jews at the times of Jesus. In fact, our Savior named some of them in today’s Gospel passage. These are the basic rules to be followed in order to be saved”.
“Secondly, Jesus tells the young man that if he wants to go further and be perfect, he should give up his material possessions, give them away to the poor and follow Jesus. This is something more, something greater than to follow the basic rules. It requires greater endeavor and sacrifice, but it makes people perfect. If keeping the commandments is important, giving all up for Jesus is holy. If the first way makes us good people, the second way makes us godly people. If the first way is human, the second way is divine. This is why in the beginning of the conversation, Jesus wishes to clarify the matter and to correct the young man saying that “no one is good, but One, that is God,” meaning that real goodness and perfection comes only from God, and we should be looking for what is godly”.
“A Christian must try to adhere to the first way and should be looking for the second way. A perfect example is Holy Prophet, Forerunner and Baptist John. He lived in the wilderness renouncing all earthly possessions and dedicated all his life to the preaching about the coming of Christ, to being His Forerunner who is preparing the people for His appearance. He preached repentance and baptized the people in the Jordan. Thus St. John was living a life which later was called monastic. And many Christians chose this kind of life as monks and nuns renouncing the world and living by that second way taught by our Lord, the way of perfection and holy life in Christ.”
“But, as we saw from today’s Gospel story, the second way is hard to fulfill. The young ruler went away from Jesus sorrowful. He was not ready to give up his possessions. This is why our Lord told the Disciples a very famous saying: “It is easier for a camel to go through the eye of a needle than for a rich man to enter the kingdom of God.” (Mt. 19, 24)”.
“However, our Lord gives us a great hope saying that “with men this is impossible, but with God all things are possible.” (Mt. 19, 26). Things which seem to be impossible for men to accomplish become very much possible if God helps us. Thus a rich man can enter the Kingdom of God if God helps him. A greatest sinner can become a Saint if God helps him. A weak can be strong if God helps him. There are many examples of that. The grace of God has no limitations or restrains. It works everywhere if God wishes. Therefore, the third point Jesus makes, and this is the most important point in today’s Gospel lesson, is that if we are looking for what is godly and perfect and do it sincerely, God Himself will give us a hand”.
“When St. Paul had temptations and led a spiritual warfare against his passions, he asked God to free him from those demons. Our Lord in some mysterious way told St. Paul: “My grace will be sufficient for you” (2 Cоr. 12, 9).  Thus, the grace of God is always given sufficiently to us to accomplish anything. There are may be many examples in our life and in the history of mankind that prove that. I could recall them for you but I rather speak about today’s commemorated Saint. Today we honor Holy Martyr Myron. He was a priest and he was persecuted for his faith. The ruler who ordered him to be tortured was very astonished that St. Myron could endure those terrible tortures. It seemed to be impossible to endure and survive them yet the Saint survived being helped by the Lord Jesus Christ. Then the ruler being so disappointed and angry that the tortures accomplished nothing, committed suicide. Things impossible with men became possible with God, and the grace of God was sufficient for Holy Martyr Myron”.
“Dear brothers and sisters! All this should convince us that the grace of God works in many different, sometimes mysterious ways to help us to accomplish our goal of perfection, salvation and becoming true followers of our Lord Jesus Christ”. 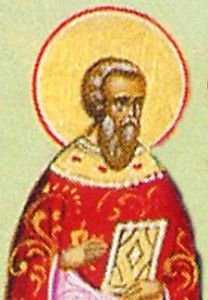 The choir prayerfully performed hymns dedicated to the Most Holy Mother of God during preparation for Holy Communion.

After the Liturgy dismissal the Rector greeted our former parishioner Anastasia Flora who visited our church on that day and whose spouse, Nenad (Elisej) Flora had been recently ordained a priest for the ROCOR mission in the Dominican Republic. Fr. Igor expressed his heartfelt wishes to the new Matushka and her husband wishing them all God’s graces and help in their zealous ministry for the Holy Church and Orthodox faithful. Traditional Polychronion was proclaimed.

The interaction between the Rector, parishioners and guests continued at the trapeza table during the coffee hour.