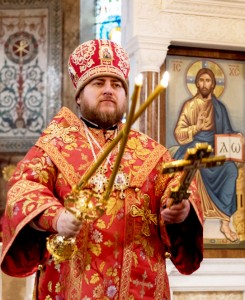 I extend my heartfelt congratulations to all of you on this significant date – the 50th anniversary of the founding of the Patriarchal Parishes of the Russian Orthodox Church in the United States of America and Canada.
Exactly 50 years ago, in 1970, special canonical subdivisions of the Russian Orthodox Church were formed, uniting the Patriarchal Parishes of the Russian Orthodox Church in the United States of America, Canada and Mexico, which are under canonical jurisdiction of the Moscow Patriarchate under the omophorion of the Most Holy Patriarch of Moscow and all Rus’.
Commemorating this anniversary and reflecting on the past, we must thank the Lord for all of His many and ineffable blessings bestowed on the clergy and faithful children of the Russian Orthodox Church on the North American continent.
Today, we prayerfully remember the 42nd anniversary of the blessed repose of Metropolitan Nikodim (Rotov), the first Administrator of the Patriarchal Parishes in the USA and Canada. The life of the Patriarchal Parishes is inspired by the archpastoral instruction and personal example of this outstanding hierarch of the Russian Orthodox Church, who stood at the origins of new ecclesiastical life in North America. The apostolic word of Metropolitan Nikodim was addressed to everyone who sought the truth, regardless of nationality, social status or religious views. Through the efforts of the ever-memorable Metropolitan Nikodim, Orthodox brotherhoods and sisterhoods were opened in North America, parish schools were established, and new clergy were ordained. Many of the clergy, ordained by Vladyka Nikodim were Americans who converted to Orthodoxy, and later led generations of English-speaking parishioners to Christ.
For many years, the ecclesiastical and administrative center of the Russian Orthodox Church in the United States has been and remains Saint Nicholas Patriarchal Cathedral in New York City, which was given the status of the Representation of the Moscow Patriarchate to the Autocephalous Orthodox Church in America. Saint Nicholas Cathedral, a symbol of the presence of Russian Orthodoxy in America, was built under the leadership of the future Hieromartyr Protopresbyter Alexander Hotovitsky and was consecrated in 1902 by Bishop Tikhon (Belavin) of North America who would later become the Patriarch of Moscow and all Russia. An example of the legacy of Saint Tikhon and his archpastoral labors is the Cathedral of Holy Great Martyr Barbara in the city of Edmonton, the province of Alberta, which remains the center of the spiritual and educational mission in Canada.
The Patriarchal Parishes in North America serve not only as a place of worship, but also carry out a large missionary and social ministry, uniting a large multicultural flock. Closely related to the activities of the Patriarchal Parishes is the work of the Representation of the World Russian People’s Council to the United Nations, which has been successfully carried out for many years.
We give thanks to the Lord and giver of all blessings for His mercies shown to us. With love and gratitude, we prayerfully honor the memory of all who have labored for Holy Orthodoxy in the countries of North America: hierarchs, clergy of all ranks, members of parish committees and councils, choir directors and chanters, Sunday school teachers, members of brotherhoods and sisterhoods.
Today, celebrating the 50th anniversary in the difficult conditions of modern life and the trials facing all of mankind, following the example of our devout and pious predecessors, let us be courageous and strong so that in accordance with the words of the apostles, we may have common joy to praise God and be in favor among all the people, so that the Lord may add daily those to the Church who are being saved. (Acts 2:47).
May God’s blessings be with all of you through the intercession of Saint Tikhon and all the saints who have shown forth in the lands of America & Canada.