On May 6 the Church commemorates Holy Great Victorious Martyr George. It is a Patronal feast of our Parish.This year it fell on the Bright Monday, the second day of Pascha.
St. George parish family had a solemn and beautiful celebration. It was headed by our Archpastor, Most Rev. Justinian, Archbishop of Naro-Fominsk. His Eminence arrived at 10:30 AM and was greeted by our Parish Warden Olga Roussanow at the entrance to the temple. Archbishop Justinian entered the church where he was met by the clergy. He then celebrated solemn Divine Liturgy. The Liturgy was concelebrated by our Rector, priest Igor Tarasov; Representative of the Russian National Council at the UN, archpriest George Roshchin; Chancellor of the Patriarchal Parishes, hegumen Nikodim (Balyasnikov); Secretary of the Archbishop, archpriest Eugene Goncharenko; clergy from the ROCOR: hieromonk Eutychius (Dovganyuk), hieromonk Zosimas (Krampis), and priest Aleksiy Paranyuk; cathedral protodeacon Igor Panachev and deacon Rodion Shamazov.
At the Little Entrance Archbishop Justinian commending the great merits of our Rector, priest Igor Tarasov in his service to the Holy Church elevated him into the rank of an Archpriest.
Before the rite of the holy Communion archpriest George Roshchin preached a brief sermon about the life and endeavors of St. George.
Our temple was almost filled with the guests from other parishes, among whom were the youth representatives from St. Nicholas Cathedral headed by Igor Kochan, our friend and benefactor Captain Stelios Tatsis and some parishioners of other Russian and Greek churches of the area.
At the end of the Liturgy the clergy headed by His Eminence, Archbishop Justinian had a procession around the temple singing Paschal hymns. Archbishop blessed faithful with holy water. Following the Liturgy Most Rev. Justinian said a few words about our holy Patron, St. George. He also commended Fr. Igor and our parishioners for the continuing support of the Parish and preserving the church life in such difficult circumstances. He then congratulated all who celebrated their name day and proclaimed a polychronion (singing of the “Mnogaia leta!, “Many years!”) to them.
Celebration continued on the church property where our ladies and the youth organized a picnic. Our Rector, Archpriest Igor had a toast to the honor of His Eminence, Archbishop Justinian. He said that we all should attempt to imitate St. George who was victorious because he was following the greatest Victor, our Lord Jesus Christ Who was risen from the death conquering death and evil. As a small flock, we still have a hope to be victorious by the protection of St. George and by the power of the Risen Christ, as well as being under the omophorion of Archbishop Justinian whose name contains some hints of the victory. Holy king Justinian, the Archbishop’s patron, was a victorious and successful ruler. In addition, the Archbishop’s secular, baptismal name was Victor. We then hope that with such a victorious Archpastor we may be successful in our religious and parish life.
Everybody enjoyed delicious food, nice company, interesting conversations, as well as singing of the Russian and Ukrainian songs. 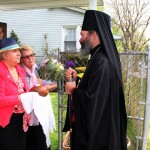 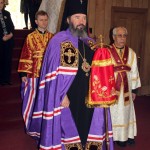 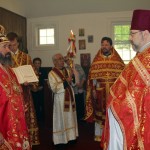 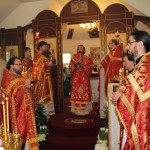 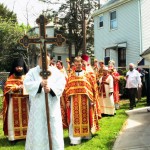 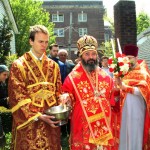 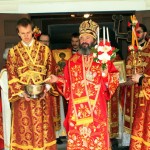 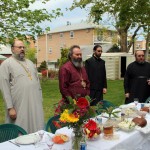