On January 17, on the Sunday before the Theophany, our parish gathered for a nice celebration in our temple. Rector of St. George Church, Archpriest Igor Tarasov served the Divine Liturgy. After the Gospel lesson he preached the following homily:

After the dismissal of the Liturgy the Rector made announcements regarding coming holy day of the Theophany and addressed the main ideas of his English homily speaking in Russian.

Parish Warden and Choir Director, Olga Roussanow greeted Archpriest Igor Tarasov on the occasion of his past 55th birthday and expressed good wishes to our pastor on behalf of all the parishioners. Traditional Polychronion (“Mnogaia leta!”) was proclaimed to Fr. Igor. Then the Rector thanked her and parishioners for their greetings.

After the service a delicious luncheon was served in honor of Fr. Igor’s birthday. The Rector and parishioners had a chance to enjoy tasty meals and a nice company. 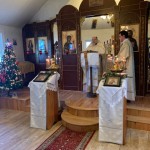 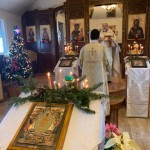 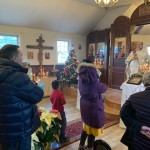 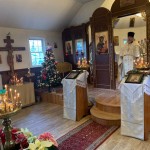 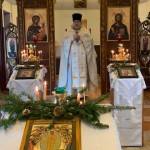 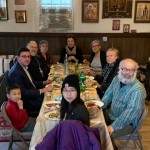