On January 24, on the Sunday after the Theophany, our parish community had a nice celebration at St. George Church. Our Rector, Archpriest Igor Tarasov headed the Divine Liturgy. After the readings from the Sacred Scripture he preached the following homily:

“Dear brothers and sisters in Christ! Today we celebrate Sunday after the Theophany and we hear in the Gospel lesson that our Lord Jesus Christ began His preaching with the same words that were used by St. John the Baptist: “Repent, for the Kingdom of Heaven is at hand” (Mt. 4, 17)”.
“As we said a week ago, repentance is the first condition to begin spiritual life, to convert to God. This is why it was preached by St. John and that is why it became the first theme of the preaching of our Lord Himself. There is no salvation without repentance. And for every Christian person the path to salvation starts with true repentance”.
“Both St. John and the Lord stressed that repentance is needed because “the Kingdom of Heaven is at hand”. What those words “at hand” mean? They mean that the Lord Jesus Christ Himself came to the world; He appeared to the universe at the Jordan River being baptized. And the Three divine Persons of the Trinity appeared there. This is the sign that God is in this world of ours; He is here to help, to forgive our sins, to cleanse us from our impurity, to lead us to His Heavenly Kingdom. He is ready to do anything for us. The only thing we need to do is to repent”.
“But here we begin to see difficulties. It is hard for us to repent, to acknowledge our sins, to confess our errors. It is hard to overstep our pride, selfishness and vain-glory. Our enemy will always try to prevent us from repentance. He may offer us a false mirror where we could not see ourselves truly. In such a false mirror we would not see our sins and shortcomings, we may then think that we have nothing to repent. I met such people many times. Some of them are not really churched, and it is understandable that they don’t know how to approach the Sacrament of Penance. But some of them, unfortunately, are going to the church. Thus when they come to confession, they say, “I have nothing to confess; I don’t recall any sins”. In such a case a priest hearing confession may say, “Well, you are a Saint! You need no confession!” But that would be a joke. But if we talk seriously, a priest would then instruct such a person. He may ask him questions whether he committed certain sins or not. In many parishes priests hand out the lists of sins for the faithful to prepare for confession, especially during Lent. It is helpful. Sometimes people are surprised reading those lists. They say, “Oh, I did not know that this is a sin”. Thus people need to be taught how to repent, how to approach confession. If they are, they become more aware of their possible sins”.
“Therefore, dear brothers and sisters, we need to throw away that false mirror of our pride and begin to see ourselves truly and without distortion. Also, we have to avoid making false excuses for our sinfulness and lack of repentance. Some people say that they were not raised in a religious environment, so they don’t know how to confess and they commit sins. Some people say that the others who surround them are not just and holy, so it is difficult for them to be righteous. Some even say that the whole society is no longer religious. The government is bad, the politicians are bad, so we should not be expected to be perfect. There may many more excuses. All of them are not valid. Each of us is capable of converting, of repenting, of changing”.
“The devil may also whisper to us that we may surely repent, but later. And many of us are ready to agree: “Yes, I need to repent, I need to go to confession, but not now. I may take my time to enjoy something, to sin a little longer”.  But how do we know how much time is left? Every day, even every hour and minute of our life may become the last one! And if we are not prepared, if we did not repent, we may lose eternal salvation! Here the words that “the Kingdom of Heaven is at hand” can also be applied. Since our earthly life is uncertain and every moment may be the last one, the Kingdom of God is always at hand, is always near”.
“Therefore, dear brothers and sisters, let us not listen to those thoughts, to those advises of the evil one. Let us not postpone our repentance, our confession of sins. Let us be prepared for the Kingdom of Heaven to become a reality of our existence”.
“Let us not resemble those described in today’s Gospel lesson as “the people who sat in darkness… those who sat in the region and shadow of death” (Mt. 4, 16).  Many people in the world are like that – sitting in the spiritual darkness of sin, false religions, idolatry and iniquities. However, we are called to enjoy Christ, our true Light who illumines and enlightens us. Let us then ask Him to shed His divine light upon our souls, so we could see our sins, our true self and then be able to abandon them, to improve, to repent and to acquire eternal salvation, to enter that glorious Kingdom of Heaven!”

The choir prayerfully performed the magnification of the Theophany as well as the odes from the festal canon during preparation for Holy Communion.

After the dismissal of the Liturgy the Rector said a few words regarding the Saint honored on this day, Venerable Theodosius the Great, founder of the cenobite monastic life. 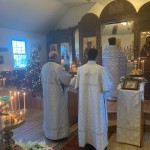 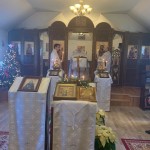 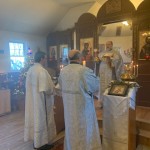 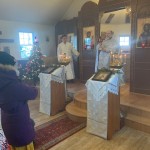