On March 21, on the First Sunday of Lent, also known as celebration of the Triumph of the Orthodoxy, St. George parish had a nice liturgical service. Our Rector, Archpriest Igor Tarasov served the Liturgy of St. Basil the Great. After the Scripture readings he preached the following homily:

“Dear brothers and sisters in Christ! On the first Sunday of Lent we commemorate the victory of the true faith over the heresy of iconoclasm. It happened in the 9th century when a wrong teaching prohibiting to venerate the holy images was defeated and condemned at the 7th Ecumenical Council. For that reason today’s Sunday is known as Sunday of Orthodoxy. The feast itself was introduced to mark the victory over the iconoclasm. But at that point in the history, after those seven Councils, the Church completed its proclamation of the Christian teaching. The Church formulated and defined all main truths of faith in the decisions of those Councils. This is why we call that victory not the triumph of the veneration of the icons, but the triumph of Orthodoxy”.
“It does not mean that no more heresies emerged after this triumph. On the contrary, much more of them appeared following the 9th century. But today’s feast means that all the heresies are condemned in advance by the teaching of the seven Councils”.
“In today’s world we may see two main heresies. The one is the wrong understanding who Jesus Christ is, and another is the new iconoclasm, refusal to venerate the holy icons”.
“Some modern heretics call Jesus Christ the Great Teacher; they like His teaching, but they do not consider Him the Son of God.  Even if they admit that He is God’s Son, they still refuse to believe in His miracles and His resurrection. For instance, they often interpret the resurrection of the Lord in the spiritual sense only and deny the resurrection of His Body. All these errors of thought were condemned b the teaching of the seven Councils”.
“If Jesus Christ is not the Son of God, born from the Holy Spirit and the ever- Virgin Mary, and if He did not rise from the dead, then no salvation of the human race took place. Then we remain in sin and death has the power over the world. Then our life has no sense”.
“But we believe that the life has a great value because our Lord Jesus Christ – the Son of God who became man – saved us from the sin and death. And today the Church celebrates the victory of that saving teaching”.
“Another modern heresy is denial to venerate the holy images. Such a wrong conviction can be seen in all the Protestant denominations. Some of the preachers of that heresy call the icons idols. This is not new in the history. They just repeat the mistakes of the ancient iconoclasts”.
“Modern iconoclasts have pretty primitive philosophy. They say that Ten Commandments prohibit to worship the man-made images. The ancient Greeks had more sophisticated grounds to deny the icons. They believed that the matter is evil, thus God cannot unite with the evil things. They went further saying that the Son of God could not unite Himself with the human nature, to become man. But the Holy Scripture clearly states that all created by God is good. God did not create evil. The matter is good because God made it. Our flesh is good, our environment is good, the whole universe is good. The Son of God united with what is good”.
“Thus God who became man can have an image. His human nature can be shown on the holy icons. The true Christians venerate our Lord Jesus Christ, His Blessed Mother and the Saints who are pictured on the icons, and not the wood and paint. In this way we worship the true God who became man and venerate the image of His Incarnation. Jesus Christ for us is a true God and true Man, not an idol. By proclaiming the veneration of the icons the Church protected the truth of the Incarnation”.
“Therefore, dear brothers and sisters, let us listen to the Church saying to us today: “Come, let us venerate the holy images of Christ, His Pure Mother and Saints, and let us reject the evil faith of those who proclaim bad tidings””.

The choir prayerfully performed the 33rd Psalm during preparation for Holy Communion.

After the Liturgy dismissal the Rector performed prayer service of the Sunday of Orthodoxy solemnly declaring the Orthodox faith and proclaiming eternal memory to the champions of that faith and the polychronion to the Church hierarchy and Orthodox Christians.

At the conclusion of the service the Rector preached congratulated the parishioners on the completion of the first week of Lent and wished them to continue an endeavor of further observance of the fast. He also made some announcements. 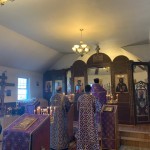 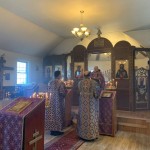 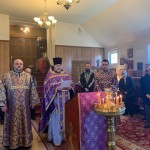 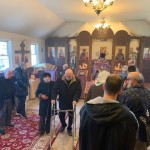