On April 11, on the Fourth Sunday of Lent, St. George Parish held a nice liturgical celebration. Our Rector, Archpriest Igor Tarasov served the Divine Liturgy in our temple. After the Scripture readings he preached the following homily:

“Dear brothers and sisters in Christ! Today’s Sunday continues to lead us in our spiritual journey of the Great Fast. Today the Church wishes us to commemorate Holy Father John Climacus, or John of the Ladder, a holy monk who lived in the monastery on Mt. Sinai and became an author of the book called “The Ladder of Divine Ascent”. This book is known as a guide for spiritual life. And today’s reading from the holy Gospel of Mark is telling us what is important for the life to be spiritual. The important thing is to have faith. Faith helps people to acquire many gifts. Today’s Gospel tells that faith helped a father of a young man possessed by a demon. Due to his father’s faith, he was made whole by our Lord Jesus Christ”.
“Lack of faith becomes the reason for many troubles in the world. People who have a very shaky and small faith are easy to be drawn away from the right perception of everything around them. This is why we have so many problems in the society, so much immorality in the conduct of the people. I have recently read that in India a man whose wife died, decided to marry a rat because he believed that his wife’s soul was in that animal. These people there are not Christian and believe in many idols. Therefore, due to their wrong perception of spiritual world they may do such odd things. But this country, America, had been founded by Christians. They were not Orthodox but they did believe in Christ and read their Bible. And what happened to that country? Nowadays the American people are lacking faith and therefore, they are not having a right view of many things. We are now told that we can marry a person of the same sex. We are told that a child can change his or her sex. I suspect that in the near future we will be told that a person can marry an animal. And this is not really surprising because the statistics says that now less than 50% of the American people belong to some church or denomination. More than a half of the population has no strong ties with any religion. It happened in this 21st century although before, in the 20th century, about 70% of the Americans did belong to some denomination. Thus the problems and immorality in the society are caused by the lack of faith which is now so widespread”.
“The world populated with people having insufficient faith resembles a chaos. People suffer in that world because they lack faith. This is why our Lord Jesus is shown losing His temper in today’s Gospel and exclaiming: “O faithless generation, how long shall I be with you? How long shall I bear with you?”(Mk. 9, 19). And when faith is lacking, the people and the world becomes driven by the evil forces, because they have no difficulty to overcome them. The example of the young man possessed by such evil force in today’s Gospel has to show us what may happen to the people lacking faith and not living a spiritual life. They may become prisoners of evil and have no possibility to free themselves”.
“On the other hand, if people have faith, all things become possible. God’s power is being then released through peoples’ faith. And our Lord seeks to elicit such faith from us, as He was seeking to find it in the father of the possessed young man. We read that the father was not certain about his faith in Jesus. He pleaded with the Lord: “Lord, I believe, help my unbelief!”(Mk. 9, 24). What was that? It is a faith, but faith seeking God’s help. The presence of a doubt does not mean the absence of faith. Christ honors whatever faith we have, as long as it is sincere. He then will increase our faith when we sincerely desire Him to do so”.
“The two essential expressions of faith are prayer and fasting. Our Lord stresses today that the evil force may not be driven away without them. Remember, two weeks ago we were talking about four friends who brought the paralyzed man to Jesus? We said that prayer, fasting, repentance and participation in the life of the Church are those friends bringing us to the Lord. Today we have to repeat it again saying that prayer and fasting are our first friends to help us, to make us whole, to bring us to the Lord and to protect us against the evil”.
“Therefore, dear brothers and sisters, let us practice prayer, endure in fasting and thus drive away our enemies and get closer to our Lord Jesus Christ whose saving Passions we are now anticipate to celebrate. Let us cherish and hold our faith, so we could not be called “faithless generation”. Let us rather understand that our faith may not be great, but let us sincerely ask the Lord to increase it through His divine grace. Let us exclaim with the father of the young man: “Lord, I believe, help my unbelief!” Then He will help and make our faith strong and making wonders. And thus, let us persist in our spiritual journey toward His Holy Resurrection”.

The choir prayerfully sang hymns in honor of Venerable John of the Ladder and the Psalm 33 during preparation for Holy Communion.

Following the Liturgy dismissal the Rector preached a short sermon about the past feast of the Annunciation of the Most Holy Mother of God and made some announcements. 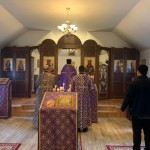 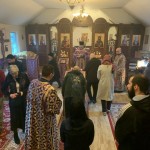